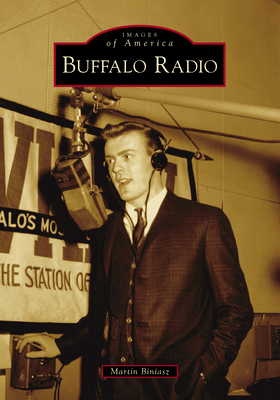 
Ships to Our Store in 1-5 Days
Since the first broadcasts of Buffalo, New York's pioneer radio stations during the 1920s, the medium has played an important role in the everyday lives of the city's citizens. From snowstorms to Super Bowls, radio and its talented broadcasters have helped to shape the city's identity. Buffalo's longest operating station, WGR, signed on the air in May 1922 and was soon followed by WEBR (1924), WKBW (1926), and WBEN (1930), among others. Over the decades, the city has been home to a number of legendary announcers, including Clint Buehlman and Billy Keaton and sports broadcasters Ralph Hubble, Bill Mazer, Van Miller, and Stan Barron, as well as beloved talk show hosts like John Otto and pioneer rock and roll DJs like George Hound Dog Lorenz. Buffalo became a breeding ground for network radio stars, including Howdy Doody's Buffalo Bob Smith, comedian Foster Brooks, NBC Tonight Show host Jack Paar, and Fran Striker, the creator of The Lone Ranger. Top 40 personalities like Joey Reynolds, Dick Biondi, Tommy Shannon, and Danny Neaverth ruled the airwaves with excitement and spontaneity during the 1960s.