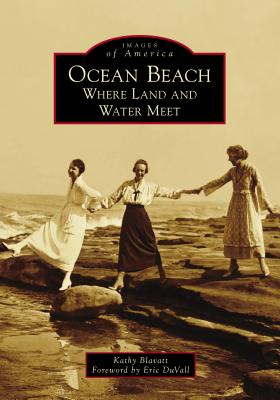 
Currently Unavailable
Water defines Ocean Beach by its unique location where the Pacific Ocean meets the mouth of the San Diego River, alongside Mission Bay, formerly known as False Bay, which connected to tidal marsh areas. The beach town's natural attractions and new prospects brought early settlers to Ocean Beach when it was established in 1887 by William Billy Carlson and Frank Huggins. Ocean Beach's landmass history is shaped and reshaped by major storms, wave and tidal surges, and droughts, which in turn transform the community's natural habitat, culture, and development. For example, the Ocean Beach Woman's Club's (OBWC) Flatiron Building, constructed on the shoreline, was destroyed by several storms from 1939 through 1941 and later removed, and the area where it once stood was turned into a park. The OBWC later moved its permanent headquarters away from the beach. The history and fabric of this unique ocean community is made up of an assortment of characters and spirited generations of individuals who have left their loving marks through their homes, gardens, businesses, stories, achievements, and community activities.