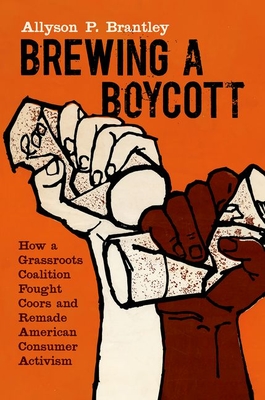 In the late twentieth century, nothing united union members, progressive students, Black and Chicano activists, Native Americans, feminists, and members of the LGBTQ+ community quite as well as Coors beer. They came together not in praise of the ice cold beverage but rather to fight a common enemy: the Colorado-based Coors Brewing Company. Wielding the consumer boycott as their weapon of choice, activists targeted Coors for allegations of antiunionism, discrimination, and conservative political ties. Over decades of organizing and coalition-building from the 1950s to the 1990s, anti-Coors activists molded the boycott into a powerful means of political protest.

In this first narrative history of one of the longest boycott campaigns in U.S. history, Allyson P. Brantley draws from a broad archive as well as oral history interviews with long-time boycotters to offer a compelling, grassroots view of anti-corporate organizing and the unlikely coalitions that formed in opposition to the iconic Rocky Mountain brew. The story highlights the vibrancy of activism in the final decades of the twentieth century and the enduring legacy of that organizing for communities, consumer activists, and corporations today.