Holding the Line: The Naval Air Campaign In Korea (Paperback) 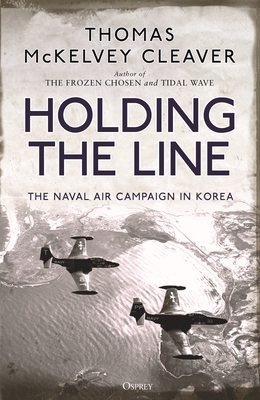 By Thomas McKelvey Cleaver
$18.00
Email or call for price

Now available in paperback, this is the gripping story of Task Force 77, the US Navy carrier commitment to the Korean War that was vital to the success of the UN forces battling the Chinese and North Koreans.

Naval and air power were crucial to the United Nations' success in the Korean War, as it sought to negate the overwhelming Chinese advantage in manpower. In what became known as the “long hard slog,” naval aviators sought to slow and cut off communist forces and support troops on the ground. USS Leyte (CV-32) operated off Korea in the Sea of Japan for a record 93 continuous days to support the Marines in their epic retreat out of North Korea, and was crucial in the battles of the spring and summer of 1951 in which the UN forces again battled to the 38th Parallel.

All of this was accomplished with a force that was in the midst of change, as jet aircraft altered the entire nature of naval aviation. This paperback edition of Holding the Line chronicles the carrier war in Korea from the first day of the war to the last, focusing on front-line combat, while also describing the technical development of aircraft and shipboard operations, and how these all affected the broader strategic situation on the Korean Peninsula.

Thomas McKelvey Cleaver is the author of the well-received and best-selling Fabled Fifteen: The Pacific War Saga of Carrier Air Group 15, a history of the US Navy's top-scoring carrier air group in World War II, published by Casemate. He is additionally the author of F4F and F6F Aces of VF-2 published by Osprey, and also the author of Pacific Thunder (2017) and Tidal Wave (2018). He lives in Encino, California, USA.