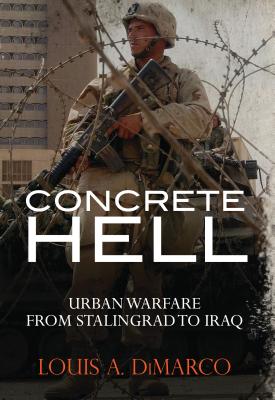 By Louis A. DiMarco


Ships to Our Store in 1-5 Days
Throughout history cities have been at the center of warfare, from sieges to street-fighting, from peace-keeping to coups de mains. Sun Tzu admonished his readers of The Art of War that the lowest realization of warfare was to attack a fortified city. Indeed, although strategists have advised against it across the millennia, armies and generals have been forced nonetheless to attack and defend cities, and victory has required that they do it well. In Concrete Hell Louis DiMarco has provided a masterful study of the brutal realities of urban warfare, of what it means to seize and hold a city literally block by block. Such a study could not be more timely. We live in an increasingly urbanizing world, a military unprepared for urban operations is unprepared for tomorrow. Di Marco masterfully studies the successes and failures of past battles in order to provide lessons for today's tacticians.
Louis DiMarco retired as a Lieutenant Colonel in the US Army in 2005 after more than 24 years of active service. His civilian education includes a Bachelor of Science Degree from the US Military Academy, a Masters in Military Art and Science from the US Army Command and Staff College, and a Masters of Arts Degree in International Relations. Currently Col. DiMarco is assigned to the faculty of the Army Command and Staff College, where he teaches military history and elective courses on the history of modern urban warfare and modern warfare in the Middle East. Col. DiMarco has authored several key Army doctrinal manuals including FM 3-06, Urban Operations (2002). Other written projects include the Army's Scout Platoon Field Manual (1994), and the first work in the Combat Studies Institute's Global War on Terror series entitled Traditions, Changes, and Challenges: Military Operations and the Middle Eastern City (2004). Col. DiMarco has written and lectured on a variety of military topics including urban warfare and counterinsurgency. His most recent work is an article entitled “Losing the Moral Compass: Torture and Guerre Revolutionanaire in the Algerian War.''