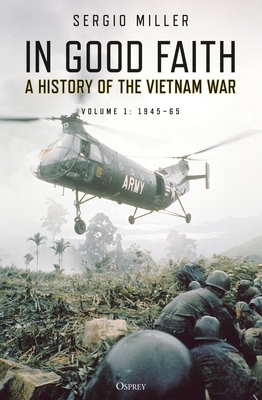 This is the first title of a highly detailed yet accessible two-volume history of America's involvement in Vietnam, drawing on cutting-edge research and top secret material to tell the full story from the end of World War II through to the Fall of Saigon in 1975.

In Good Faith charts the course of America's engagement with the region, from its initially hesitant support for French Indochina through the advisory missions following the 1954 Geneva Accords, then on to the covert war promoted in the Kennedy years, the escalation to total war in the Johnson era, and finally to the liquidation of the American war under Nixon.

Drawing on the latest research, unavailable to the authors of the classic Vietnam histories, these two volumes tell the whole story for the first time, including the truth behind the events of the 1964 Gulf of Tonkin incident, which opened the door to Washington's entry into the war, and which can now be told in full thanks to recently declassified National Security Agency top secret material. Examining in depth both the events and the key figures of the conflict, this is a definitive new history of American engagement in Vietnam.

In Good Faith tells the story from the Japanese surrender in 1945 through America's involvement in the French Indochina War and the initial advisory missions that followed. It describes how these missions gradually grew in both scope and scale, and how America became ever more committed to the region, especially following the Gulf of Tonkin incident in 1964, which led to the first bombing missions over North Vietnam. It finishes at the climax of one of those operations, Rolling Thunder, and just prior to the first commitment of US ground forces to the war in Vietnam in the spring of 1965.

Sergio Miller is a former British Army Intelligence Corps officer who served in Special Forces. He was deployed to Northern Ireland and undertook assignments in South America and East Asia. In the First Gulf War he served as an intelligence briefer to the UK Joint Commander. Since leaving the regular armed forces he has worked in the defence industry. He continues to support the Reserves and writes regularly on defence subjects.