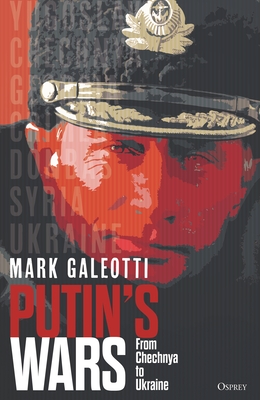 'The prolific military chronicler and analyst Mark Galeotti has produced exactly the right book at the right time.' - The Times

A new history of how Putin and his conflicts have inexorably reshaped Russia, including his devastating invasion of Ukraine.

Putin's Wars is a timely overview of the conflicts in which Russia has been involved since Vladimir Putin became prime minister and then president of Russia, from the First Chechen War to the two military incursions into Georgia, the annexation of Crimea and the eventual invasion of Ukraine itself. But it also looks more broadly at Putin's recreation of Russian military power and its expansion to include a range of new capabilities, from mercenaries to operatives in a relentless information war against Western powers. This is an engrossing strategic overview of the Russian military and the successes and failures on the battlefield. Thanks to Dr Galeotti's wide-ranging contacts throughout Russia, it is also peppered with anecdotes of military life, personal snapshots of conflicts, and an extraordinary collection of first-hand accounts from serving and retired Russian officers.

Russia continues to dominate the news cycle throughout the Western world. There is no better time to understand how and why Putin has involved his armed forces in a variety of conflicts for over two decades. There is no author better placed to demystify the capabilities of the Russian military and give a glimpse into what the future may hold.

Mark Galeotti is a scholar of Russian security affairs with a career spanning academia, government service and business, a prolific author and frequent media commentator. He heads the Mayak Intelligence consultancy and is an Honorary Professor at University College London's School of Slavonic and East European Studies as well as holding fellowships with RUSI, the Council on Geostrategy and the Institute of International Relations Prague. He has been Head of History at Keele University, Professor of Global Affairs at New York University, a Senior Research Fellow at the Foreign and Commonwealth Office and a Visiting Professor at Rutgers-Newark, Charles University (Prague) and the Moscow State Institute of International Relations. He is the author of over 25 books including A Short History of Russia (Penguin, 2021) and The Weaponisation of Everything: A Field Guide to the New Way of War (Yale University Press, 2022).

“The prolific military chronicler and analyst Mark Galeotti has produced exactly the right book at the right time.” —The Times

“Mark Galeotti is one of the most insightful and incisive analysts on Russia's past, present, and future. Russia's February 2022 expanded invasion of Ukraine tragically highlights the critical importance of understanding the connection between politics and war. Galeotti vividly shows how Russia has waged its wars... [and] how those wars shaped the country's politics and, in turn, how politics shaped Moscow's military campaigns.” —Joshua C. Huminski, Director, Mike Rogers Center for Intelligence and Global Affairs, Center for the Study of the Presidency & Congress

“This is a vivid account of how Putin has used armed force during his time in power, culminating in the deadly war in Ukraine.” —Sir Lawrence Freedman, Emeritus Professor of War Studies, King's College London

“Putin's Wars is Galeotti at his finest: writing that moves like a spy novel and enough information for the student or professional reader … An excellent and accessible contribution to the field for seasoned Russian observers and those interested in the larger sweep of how it all transpired.” —Dr Yuval Weber, Bren Chair of Russian Military and Political Strategy at the Brute Krulak Center for Innovation and Creativity at the US Marine Corps University

“Galeotti's work is essential reading for anyone seeking to understand current events in Ukraine” —Gillian Tett, The Financial Times

“Mark Galeotti has written the essential backstory to the biggest land war in Europe since 1945: Putin's Wars: From Chechnya to Ukraine.” —The Warbird's Forum

“In Putin's Wars, Mark Galeotti, a British scholar and journalist highly regarded by experts on Russian military matters, attributes the unexpected battlefield outcome to Russian weaknesses as well as Ukrainian strengths (greatly abetted by NATO weapons and American intelligence resources), but he lays out a persuasive, detailed case that Russia's deficiencies are more severe and more deeply rooted than many Western officials and pundits had detected.” —New York Review of Books