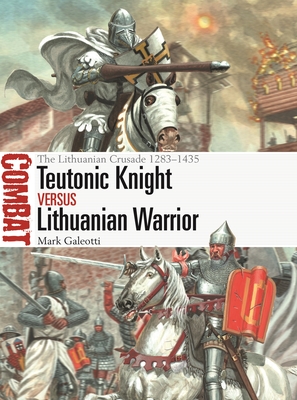 The Teutonic Knights were a military order committed to spreading Christendom eastwards into the non-Christian realms of the Baltic and Russia. They progressively extended their control across the various feuding tribes of the Baltic until they confronted the Grand Duchy of Lithuania, a relatively well-organized and cohesive state. Fully illustrated, this book investigates the fighting men on both sides, assessing their origins, tactics, armament and combat effectiveness in three clashes of the Lithuanian Crusade.

The battle of Voplaukis (1311), triggered by a major Lithuanian invasion of newly Christianized lands, saw the Teutonic Knights defeat the numerous but relatively poorly equipped Lithuanian raiders once they had brought them to battle. As a result, the Lithuanians would begin to prepare for full-scale warfare, and the siege of Kaunas (1362) was the month-long investment of the first brick-built castle the Lithuanians constructed. In the battle of Grunwald (1410), the forces of the Polish–Lithuanian Commonwealth – fielding knights by now almost comparable to those of the Order – broke the armies of the Teutonic Knights, a defeat from which the Order would never really recover. This lively study lifts the veil on these formidable medieval warriors and three battles that shaped the Baltic world.

Dr Mark Galeotti runs the Mayak Intelligence consultancy and is also an Honorary Professor at UCL, a Senior Associate Fellow with RUSI and a Senior Non-Resident Fellow at the Institute of International Relations Prague. Formerly Head of History at Keele University in the UK and Professor of Global Affairs at New York University, he is a former Foreign Office adviser on Russian security affairs, and for 15 years (1991–2006) wrote a monthly column on this for Jane's Intelligence Review.

Giuseppe Rava was born in Faenza in 1963, and took an interest in all things military from an early age. Entirely self-taught, Giuseppe has established himself as a leading military history artist, and is inspired by the works of the great military artists, such as Detaille, Meissonier, Röchling, Lady Butler, Ottenfeld and Angus McBride. He lives and works in Italy.