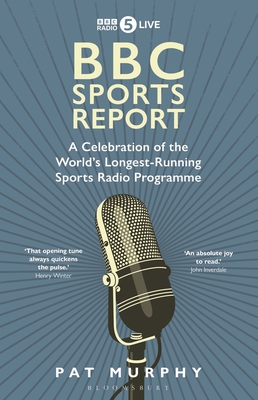 'Opens the doors to one of the great radio institutions.' – Dan Walker

Sports Report is as much a 75-year history of sport as a BBC radio institution and Pat Murphy pays handsome tribute to a programme that is still followed affectionately by millions.

For nearly 75 years, one BBC programme has been a constant factor in chronicling the way sport is covered, in all its many facets. It has been a window on the sporting world all over the globe – packed tightly into every Saturday evening for the bulk of the year.

First broadcast in 1948, Sports Report is the longest-running radio sporting programme in the world and one of the BBC's hardy perennials. Pat Murphy has been a reporter on the programme since 1981 and here he sifts comprehensively through the experiences of his contemporaries and those who made their mark on Sports Report in earlier decades. He hears from commentators, reporters, producers, presenters and the production teams who regularly achieved the broadcasting miracle of getting a live programme on air, without a script, adapting as the hour of news, reaction and comment unfolded.

Drawing on unique access from the BBC Archives Unit, he highlights memorable moments from Sports Report, details the challenges faced in getting live interviews on air from draughty, noisy dressing-room areas and celebrates the feat of just a small production team in the studio who, somehow, get the show up and running every Saturday, with the clock ticking implacably on.

Patrick Murphy is a celebrated BBC journalist and the longest-serving regular contributor to Sports Report. He started in November, 1981, specialising in cricket and football, and is famed for his many jousts with difficult members of the football industry. Murphy has been involved in 44 sports books, including acclaimed biographies of Ian Botham and Brian Clough.

“The living history of a huge part of all our lives - and there's no one in the world better to tell it than Pat Murphy” —Lee Child, bestselling author

“Pat's reporting has always been engaging, expressive and arresting. Delighted his Sports Report book is just the same” —Mark Pougatch

“That opening tune always quickens the pulse. Out of the Blue, into the drama of the sporting day. Insight, interviews, inspirational” —Henry Winter

“It was the opening theme tune that sucked you in – it's synonymous with British sport and a staple diet of listening and watching sport on a Saturday afternoon.” —Joe Root, England Cricketer

“If you have that sporting gene within you, it's a book that soundtracks your life ... Every stage of that sporting cycle, that familiar tune, those familiar voices, coming at you through each beautifully researched page ... An absolute joy to read” —John Inverdale

“This marvellous book will delight anyone who has ever shrieked or howled in response to something they heard on Sports Report, and that, surely, must be everybody.” —Mark Steel, comedian

“Sports Report has run longer than Les Miserables and The Lion King put together. Patrick Murphy is the show's perfect leading performer to tell its story from opening night in 1948 through the turbulent, exciting three-quarters of a century that followed, both on the fields of play and in the studio.” —Sir Tim Rice

“An emotional, revealing opus to mark 75 years of the show.” —Henry Winter, The Times

“A lovingly curated, profoundly researched book about the history of the show.” —The Telegraph

“Pat Murphy does it proud... he skilfully weaves tales of the programme's beginnings, the challenges it has faced over the years and the big stories that have been covered.” —Late Tackle

“It brings home the enormously long cast list of distinguished people who have reported or worked on the programme… Sports Report is a great institution and Pat's book does justice to it.” —Lord King, former Governor of the Bank of England and Aston Villa supporter

“An absolute joy of a book. A better Christmas present I cannot possible fathom” —Graeme Swann