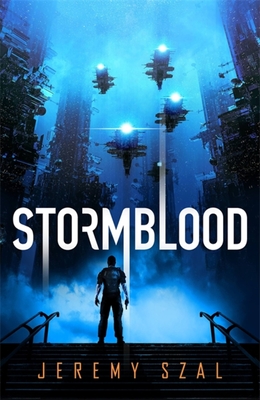 Vakov Fukasawa used to be a Reaper: a bio-enhanced soldier fighting for the Harmony, against a brutal invading empire. He's still fighting now, on a different battlefield: taking on stormtech. To make him a perfect soldier, Harmony injected him with the DNA of an extinct alien race, altering his body chemistry and leaving him permanently addicted to adrenaline and aggression. But although they meant to create soldiers, at the same time Harmony created a new drug market that has millions hopelessly addicted to their own body chemistry.

Vakov may have walked away from Harmony, but they still know where to find him, and his former Reaper colleagues are being murdered by someone, or something - and Vakov is appalled to learn his estranged brother is involved. Suddenly it's an investigation he can't turn down . . . but the closer he comes to the truth, the more addicted to stormtech he becomes.
And it's possible the war isn't over, after all . . .

Jeremy Szal was born in 1995 and was raised by wild dingoes, which should explain a lot. He spent his childhood exploring beaches, bookstores, and the limits of people's patience. He's the author of over forty science-fiction short stories, many of which have been translated into multiple languages. He was the editor for the Hugo-winning StarShipSofa until 2020 and has a BA in Film Studies and Creative Writing from UNSW. He carves out a living in Sydney, Australia with his family. He loves watching weird movies, collecting boutique gins, exploring cities, cold weather, and dark humour. STORMBLOOD is his first novel. Find him at http://jeremyszal.com/ or @JeremySzal
STORMBLOOD is a high stakes adrenaline filled adventure featuring two estranged brothers suddenly on opposite ends of an addict's war. And it's real damn good—Nick Martell, author of THE KINGDOM OF LIARS

A captivating military sci-fi debut. Stormblood tells a splendid story about two brothers divided by war that is full of comradeship, actions, and conflict—Novel Notions

A magnificent and explosive adrenaline-fest . . . Szal's debut is an absolute must read for fans of gritty, action-packed, detective and military SF—Grimdark Magazine

Stormblood feels like a superb combination of the actions in Red Rising Saga and the world-building of Mass Effect. Exciting, thought-provoking, and full of incredibly intense moments. Military sci-fi readers would be treating themselves well by putting Stormblood on their radar—Novel Notions

This frenetic, grisly sucker-punch of a book manages to be everything you could want from sci-fi, while also carving out its own niche with a rusty slingshiv.—Fantasy Book Review

Szal's world is an insane, twisted place, and STORMBLOOD is one of the best scifi stories you'll ever read—Rob Boffard

Vakov Fukasawa is a former soldier, addicted to the biotech inside his own body that makes him constantly crave for action. And there is plenty of action in this fast moving novel, but not at the expense of ideas, or of humanity, or of vivid descriptions of Szal's carefully imagined war-torn galaxy—Chris Beckett

Highly recommended, a visceral trip into the darker side of SF. . .a rich setting replete with many alien races and a constant undertone of threat—Jamie Sawyer, Author of THE LAZARUS WAR

The prose was visceral, the plot packed a punch and the emotional scenes aimed for the gut. Jeremy just burst through the door and blew away the competition with this powerful action sci-fi debut—Gray Williams, author of END OF THE LINE

STORMBLOOD is sci-fi with an edge. It's a gritty, action-packed story that fans of Richard Morgan will eat right up, but it's got a ton of heart as well. The characters - especially Vakov - are exceptional, and the future-noir setting is extremely well-crafted. You'll want two things when you're finished this book: a glass of gin and a sequel.—Nicholas Eames, author of KINGS OF THE WYLDE

Stormblood gets under your skin. It's like a prose torpedo packing a hefty payload of deep space opera noir, chrome-edged and irresistible—Michael Cobley author of Humanity's Fire