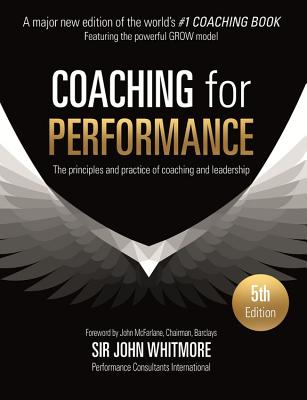 
Ships to Our Store in 1-5 Days
Coaching delivers high performance in you, your team, and your organization. "Coaching for Performance is the proven resource for all coaches and pioneers of the future of coaching." - Magdalena N. Mook, CEO, International Coach Federation (ICF)

Coaching for Performance is the definitive book for coaches, leaders, talent managers and professionals around the world.

An international bestseller, featuring the influential GROW model, this book is the founding text of the coaching profession. It explains why enabling people to bring the best out of themselves is the key to driving productivity, growth, and engagement. A meaningful coaching culture has the potential to transform the relationship between organizations and employees and to put both on the path to long-term success.

Written by Sir John Whitmore, the pioneer of coaching, and Performance Consultants, the global market leaders in performance coaching, this extensively revised and extended edition will revolutionize the traditional approach to organizational culture. Brand-new practical exercises, corporate examples, coaching dialogues, and a glossary strengthen the learning process, whilst a critical new chapter demonstrates how to measure the benefits of coaching as a return on investment, ensuring this landmark new edition will remain at the forefront of professional coaching and leadership development.

Sir John Whitmore was the pioneer of coaching in the workplace and Co-Founder of Performance Consultants International, the market leader in coaching globally. He was the first to take coaching into organizations in the early 1980s and creator of the GROW model, the most used coaching model in the world. Honoured for his lifetime's work with the President's Award from the International Coach Federation, Sir John's global contribution to coaching and leadership has helped to drive organizational transformation. Through his books - most notably Coaching for Performance - workshops and speeches, he defined the principles of performance coaching and midwifed its birth from sporting excellence, transpersonal psychology, and emotional intelligence. Coaching for Performance is widely considered to be the bible of coaching and Sir John's vision, philosophy, and methodology has inspired millions of managers, leaders, and coaches across four decades to bring the best out of themselves and others. The new edition of Coaching for Performance was completed before his death in 2017, and his extraordinary legacy is continued by his colleagues.
Performance Consultants International Founded in the early 1980s by Sir John Whitmore, Performance Consultants' mission is to transform the relationship between organizations and employees. Their stance is simple: organizations are sitting on a great untapped reservoir of potential - that of their people. They partner with organizations globally on effective leadership development, coaching and culture transformation. Market leaders in their field, they invite organizations to improve performance through their leaders and thereby reap rewards for people, profit and planet. Their flagship development program named after this book is Coaching for Performance, it is considered the industry gold standard and delivered in over 40 countries and in 23 languages.

In this Fifth Edition of Coaching for Performance , Sir John Whitmore and Performance Consultants shine a light on what it takes to create high performance and unpick the myths around coaching.—John McFarlane, Chairman, Barclays PLC , Chairman, The CityUK

Coaching for Performance directly impacts the way of working in our companies. It provides coaches and leaders with a fantastic tool for people development that is so powerful.—Jean-Louis Araignous, C oaching Program Manager, Volvo Group University

This book is a must-read for leaders and organizational development practitioners who recognize that coaching is a performance activity which impacts leaders, teams, and culture holistically.—Thorsten Klein, Director, Global Talent & Organization Development, eBay

This new edition is a testament to Sir John Whitmore's commitment to real change in people's lives and will bring value to all industry leaders—Tim Gallwey, author of the internationally bestselling series of 'Inner Game' books

Coaching cultures are better performing, fairer, and more sustainable than those arising out of traditional management systems. Coaching for Performance is for any leader aiming for excellence.—Ludo Van der Heyden, Professor of C orporate Governance, INSEAD

The best first book to read for leaders as well as new or experienced coaches. It goes beyond the skills that it so aptly spells out, to explain the essence of coaching.—Carol Kauffman, PhD

Whitmore has ensured that the book will remain the leading text in its field. If you read an earlier edition then little persuasion will be required to read this edition to bring you up to the cutting edge of coaching.—Professional Manager