The Last King Of Poland (Paperback) 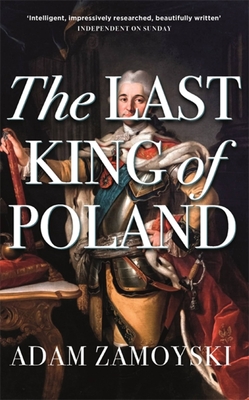 The Last King Of Poland (Paperback)

A superb study of one of the most important, romantic and dynamic figures of European history.
'A fine book ... the web of political intrigue unfolds like an appetising detective novel' Scotsman

The last king of Poland owed his throne largely to his youthful romance with the future Catherine the Great of Russia. But Stanislaw Augustus was nobody's pawn. He was an ambitious, highly intelligent and complex character, a dashing figure in the finest eighteenth-century tradition. A great believer in art and education, he spent fortunes on cultural projects, and finding that he was blocked politically by Catherine, he put his energies into a programme of social and artistic regeneration. He transformed the mood of his country and brought it to a new phase of reform and independence.

Poland's neighbours, however, viewed this beacon of liberty in their midst with alarm, and as they invaded and partitioned it, Stanislaw saw the destruction of his life's work, and ultimately was forced to abdicate, a broken man, deceived and disillusioned.

Adam Zamoyski was born in New York of Polish parents but has lived most of his life in England. He was educated at Downside and Queen's College, Oxford. He is a Fellow of the Society of Antiquaries, of the Royal Society of Arts, and of the Royal Society of Literature and has written numerous highly acclaimed historical works.
A fine book, THE LAST KING OF POLAND marries freshness of scholarship with a welcome, accessible approach. It scores on numerous counts. Early amours are depicted with Mozartian charm; the web of political intrigue unfolds like an appetising detective novel—SCOTSMAN

A tragic tale beautifully told. Zamoyski's prose does not dazzle, nothing is strained, it is cool and pellucid. He is a great writer and his biography is very readable and instructive—J B Plumb, FINANCIAL TIMES

Elegantly written and thoroughly researched ... a delightful example of the biographer's art, with a text as sensitive to the subject's personality as it is expert in the affairs of the subject's times—TIMES LITERARY SUPPLEMENT

His wonderfully fresh and vigorous style carries even the ignorant reader easily through a historical tangle which in most other authors would remain indigestible and wearisome—John Joliffe, SPECTATOR

THE LAST KING OF POLAND is a magnificent panorama of one of the saddest periods in Poland's history—Radek Sikorski, DAILY TELEGRAPH

There can be few writers as well qualified as Adam Zamoyski to assess the life and work of Poland's last king. Not only is he a master of the art of biography but he also possesses a sound knowledge of Polish political and cultural history and is able to place it well within a wide European context. Zamoyski's book is an outstanding achievement—Hubert Zawadzki, CATHOLIC HERALD

This is a book that anyone charged with responsibility, or who cares about power and its use, would do well to read—Roderic Dunnett, THE EUROPEAN

This is an exhilarating, flawlessly disciplined performance. A biography of the unfortunate Stanislaw Poniatowski, written with tremendous brio and full of shrewd sidelights on the tyrannical imperatives of international politics then and now—Jonathan Keates, OBSERVER

This sparkling study is both a fascinating biography and a pertinent reminder of the past instability of Eastern Europe—Jeremy Black, THE TIMES

Writing eastern European history is almost literally a nightmare: a surface of operetta, beneath which lurk endless, apparently pointless, complications, all ending in disaster. Adam Zamoyski has risen with great triumph above this, and has contributed a work of real scholarship that is also remarkably easy to read. He has written before - a good life of Chopin, an excellent one of Paderewski - but has not done better than this book: its sources are original and multilingual, its understanding of 18th-century politics and diplomacy is impeccable—Norman Stone, SUNDAY TIMES