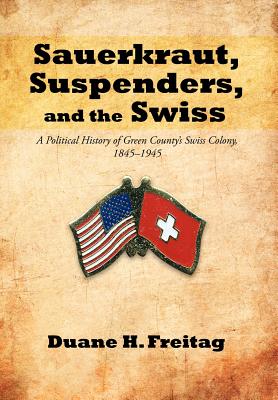 From the first "Cheese Day" in 1874 to the "Great Limburger War" of 1935, author Duane H. Freitag peers into the nooks and crannies of the tumultuous political history of Green County, Wisconsin.

In this previously untold story, Freitag pulls back the curtain to uncover how the Swiss immigrants who settled in southern Wisconsin influenced Green County politics from 1845 to 1945. Buffeted by wars, dairy industry economics, murders, epidemics, the temperance movement, and LaFollette progressivism, this immigrant group was heavily involved in each major election, asserting their political will in candidates and through the polls.

In addition to exploring the politics of the region, Freitag also discusses what caused shifts in Wisconsin's political winds throughout this period by placing Green County elections against the larger context of political landscape of the United States as a whole. In doing so, he examines the history of America and demonstrates how Swiss immigrants and other Wisconsin cultural groups responded to the events that shaped the nation.

From the abolition of slavery to prohibition, the Great Depression, and concerns about America's involvement in two world wars, Sauerkraut, Suspenders, and the Swiss demonstrates the remarkable story of Wisconsin-and American-politics.