A Guest at the Feast: Essays (Hardcover) 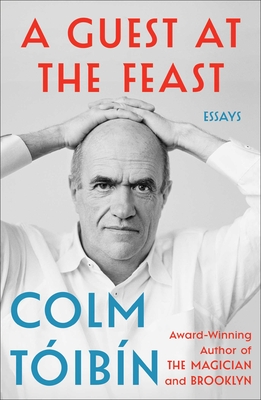 A Guest at the Feast: Essays (Hardcover)


Available at One of Our Locations
Named a Most Anticipated Book of 2023 by LitHub!

From one of the most engaging and brilliant writers of our time comes a collection of essays about growing up in Ireland during radical change; about cancer, priests, popes, homosexuality, and literature.

“IT ALL STARTED WITH MY BALLS.” So begins Colm Tóibín’s fabulously compelling essay, laced with humor, about his diagnosis and treatment for cancer. Tóibín survives, but he has entered, as he says, “the age of one ball.” The second essay in this seductive collection is a memoir about growing up in the 1950s and ’60s in the small town of Enniscorthy in County Wexford, the setting for many of Tóibín’s novels and stories, including Brooklyn, The Blackwater Lightship and Nora Webster. Tóibín describes his education by priests, several of whom were condemned years later for abuse. He writes about Irish history and literature, and about the long, tragic journey toward legal and social acceptance of homosexuality.

In Part Two, Tóibín profiles three complex and vexing popes—John Paul II, Benedict XVI and Francis. And in Part Three, he writes about a trio of authors who reckon with religion in their fiction. The final essay, “Alone in Venice,” is a gorgeous account of Toibin’s journey, at the height of the pandemic, to the beloved city where he has set some of his most dazzling scenes. The streets, canals, churches and museums were empty. He had them to himself, an experience both haunting and exhilarating.

A Guest at the Feast is both an intimate encounter with a supremely creative artist and a glorious celebration of writing.

PART ONE
Cancer: My Part in Its Downfall
A Guest at the Feast
A Brush with the Law

PART TWO
The Paradoxical Pope
Among the Flutterers
The Bergoglio Smile: Pope Francis
The Ferns Report

EPILOGUE
Alone in Venice
Colm Tóibín is the author of ten novels, including The Magician, winner of the Rathbones Folio Prize; The Master, winner of the Los Angeles Times Book Prize; Brooklyn, winner of the Costa Book Award; The Testament of Mary; and Nora Webster, as well as two story collections and several books of criticism. He is the Irene and Sidney B. Silverman Professor of the Humanities at Columbia University and has been named as the Laureate for Irish Fiction for 2022–2024 by the Arts Council of Ireland. Three times shortlisted for the Booker Prize, Tóibín lives in Dublin and New York.
PRAISE FOR GUEST AT THE FEAST

“This volume opens with his poignant journey through cancer treatment and a looming sense of mortality… A hallmark of Toíbín is his uncanny ability to deftly express the emotional undercurrent in his writing, be it loneliness, anger, or nostalgia.” —Booklist

“Toibin’s voice is so powerful and distinct, his descriptions so precise, that a single thread does weave through each of these pieces and does not snap… virtuoso… the pieces in A Guest at the Feast are a tantalizing glimpse into his full fictional powers. Time to crack open Brooklyn again.” —Laura Hackett, The Sunday Times

“Tóibín gathers 11 essays that showcase his versatility in this erudite collection of previously published material… this collection places him in that same class. Tóibín’s fans will relish these sharp reflections.” —Publishers Weekly

“Erudite essays from one of the world’s finest writers… A celebrated novelist offers personal essays on religion, literature, his Irish upbringing, and his cancer scare [in this] magnificent volume…Throughout, the poetry of Tóibín’s prose is as impressive as always. In [the] title piece, he writes that his mother was ‘what most of us still write for: the ordinary reader, curious and intelligent and demanding, ready to be moved and changed.’ Readers like her will savor every page of this book.” —Kirkus, *starred review*

PRAISE FOR COLM TÓIBÍN’S WRITING ABOUT LIFE, LITERATURE AND ART

“Colm Tóibín’s intelligence is as great as his knowledge of literature and his empathetic imagination.” —Joy Williams, Book Post

“Tóibín demonstrates wonderfully how a dedicated writer always thinks with other writers: their lives and sexuality, as well as their work. Tóibín can be engagingly mischievous and witty, but is deeply serious about books.” —Ruth Padel, Financial Times

“Tóibín writes with high-voltage restraint. . . . He is tuned in to the silent language of families, the messages that are unspoken and slip past the rest of the world, landing deep into the hearts of those who understand.” —Robert Sullivan, Vogue