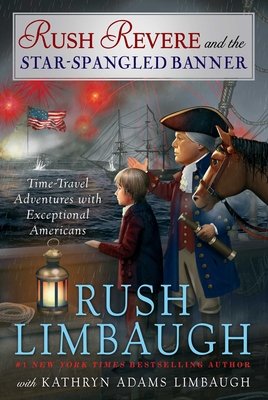 This is book number 4 in the Rush Revere series.

It’s the dawn of an important new day in America. Young readers, grab the reins and join Rush Revere, Liberty the horse, and the whole time-traveling crew in this patriotic historical adventure that takes you on an exciting trip to the past to see our remarkable nation’s most iconic symbols up close and personal!

“Rush Revere here, along with my chatty horse, Liberty! Wait a minute...Liberty? Where did he go?”

“Liberty, where did you get that spinach smoothie?”

Well, he certainly didn’t get it from 1787—that’s where we’re rush, rush, rushing off to next with our enthusiastic young friends in the Time-Traveling Crew (but not before causing a major security incident at the National Archives in Washington, D.C.!) A funny case of mistaken identity and a wild chase through the busy streets of Philadelphia will lead us to the famously introverted Father of our Constitution, James Madison, and the heated secret debates over the Constitution and the Bill of Rights. Fast-forward a few years, and we’ll help his brave wife, Dolley, risk her life to save an important portrait from the White House as the British set Washington afire!

What greater symbol of our exceptional nation’s hard-won freedoms than the Star-Spangled Banner, sewn by American icon Betsy Ross? Perhaps Francis Scott Key can explain what inspired him to pay tribute to our glorious flag by writing our beautiful national anthem. But watch out for the bombs bursting in air, because when we reach 1814, we’ll be front and center at a major battle to defend our liberty.

Jump back in the saddle with me, Rush Revere, and the Time-Traveling Crew, as my trusty horse, Liberty, takes us on another flying leap through American history into a past teeming with heroes and extraordinary citizens who have so much to teach us about patriotism. All you need to bring is your curiosity about the birth of our democracy—I’ve got plenty of tricornered hats for everyone!
Rush Limbaugh was the host of The Rush Limbaugh Show—the nation’s highest-rated talk radio program, with an audience of more than 30 million—and was the #1 New York Times bestselling author of The Way Things Ought To Be; See, I Told You So; and the Adventures of Rush Revere book series. Visit OfficialRushLimbaugh.com.