War of the Realms (Valkyrie #3) (Paperback) 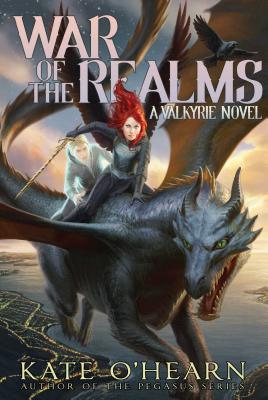 War of the Realms (Valkyrie #3) (Paperback)

This is book number 3 in the Valkyrie series.

Freya and the Valkyries must stop a war before two worlds are destroyed in this third book of an exciting series that School Library Journal described as perfect for “those looking for Rick Riordan read-alikes.”

In the world of Asgard, living among Odin, Thor, and Loki, are the Valkyries of legend. They are Norse goddesses who reap the fallen souls from human battlefields and have the power to cause death with just one touch.

At the end of The Runaway, Freya and the Valkyries were about to leave the human world when they learned that the Frost Giants, Fire Giants, and Dark Searchers had united to declare war on the Realms. Bitfrost, the legendary rainbow bridge linking the human world to Asgard, had been closed.

With their only entry back to Asgard barred, how can the Valkyries get back to fight to protect their homeland? Loki claims he knows a secret route, but can they trust him? And even if they find a way—is there anything they can do to stop the war?

As the War of the Realms spills over into Earth, Freya and the Valkyries must find a way to save not just the Norse world but the human world as well. With everything at stake, can Freya become the Hero she was destined to be?
Kate O’Hearn was born in Canada, raised in New York City, and has traveled all over the United States. She currently resides in England. Kate is the author of the Pegasus series, the Shadow Dragon series, the Titans series, the Valkyrie series, and the Atlantis series. Visit her at KateOHearn.com.