Cinderella (Once Upon a World) (Board book) 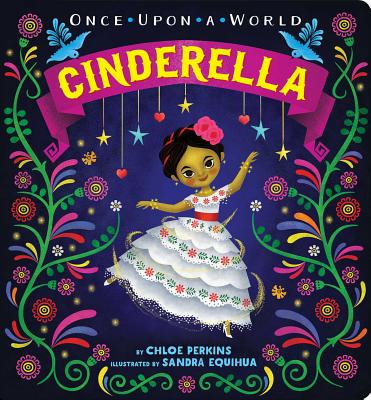 Cinderella (Once Upon a World) (Board book)


Currently Unavailable
The classic story of Cinderella gets a fresh twist in this vibrant Mexican spin on the beloved fairy tale!

Once upon a time, there was a girl who lived in a little cottage with her stepmother and two stepsisters...

The classic tale of Cinderella gets a fresh twist in this debut title of a brand-new board book series, Once Upon a World. With Mexico as the backdrop, and vibrant artwork from Mexican illustrator Sandra Equihua, Cinderella is still the same girl with a fairy godmother and a glass slipper—but she’s totally reimagined. Once Upon a World offers a multicultural take on the fairy tales we all know and love. Because these tales are for everyone, everywhere.
Chloe Perkins is the editor and author of a few dozen books for children. She lives in New York City, with her husband, Rico, and their corgi puppy/sometimes shark, Marius. Growing up in a small town in Ohio, Chloe always dreamed of writing stories that could take kids on their own reading adventures, and she’s thrilled to be doing just that!

Sandra Equihua is an illustrator, painter, and animated character designer. She was born and raised in Tijuana, Mexico. Her illustration clients have included Sony Pictures, McGraw Hill, WEA, Disney, WB, Nickelodeon, and the California State Fair. Her paintings have been exhibited in various galleries both in Mexico and the US. Equihua won an Emmy Award for her character designs on El Tigre: The Adventures of Manny Rivera (Nickelodeon), the highly-acclaimed animated television series she cocreated with her long-time collaborator and husband, Jorge R. Gutierrez. She also won an Annie Award for her character designs on The Book of Life (Dreamworks).