Solimar: The Sword of the Monarchs (Hardcover) 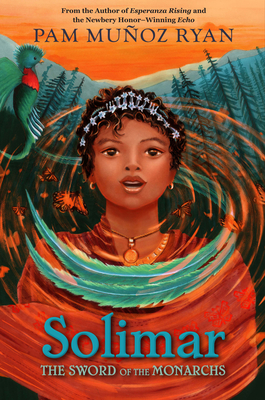 Middle-grade fans of Pam Mu oz Ryan's Esperanza Rising, will find a new Mexican heroine to love in Solimar and a fresh, magical story On the brink of her Quincea era, and her official coronation, Solimar visits the oyamel forest to sit among the monarch butterflies. There, the sun pierces through a sword-shaped crevice in a boulder, which shines on her and sends the butterflies humming and swirling around her. After the magical frenzy, she realizes she's been given a gift--and a burden: she can predict the near future She has also become a protector of the young and weak butterflies. This alone would be a huge responsibility, but tragedy strikes when a neighboring king invades while her father and brother and many others are away. The remaining villagers are taken hostage--all except Solimar.
Can this princess-to-be save her family, the kingdom, and the future of the monarch butterflies from a greedy and dangerous king?
Written for ages 8 to 12 by the Newbery Honor Medal winner of the highly acclaimed novel Echo.