The Hidden Oracle (Trials of Apollo, Book One) (Paperback) 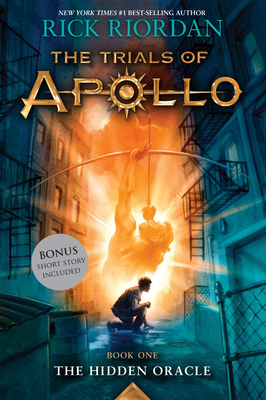 The Hidden Oracle (Trials of Apollo, Book One) (Paperback)

This is book number 1 in the Trials of Apollo series.

The god Apollo is banished to Earth as an awkward teenage mortal in this New York Times #1 bestseller, the first in a five-book series, now in paperback with a bonus short story included.
"Riordan’s many fans will be thrilled with this return to the world of Percy Jackson and friends. . . This latest has Riordan’s signature wry narration, nonstop action, and mythology brought to life."--School Library JournalHow do you punish an immortal? By making him human.

After angering his father Zeus, the god Apollo is cast down from Olympus. Weak and disoriented, he lands in New York City as a regular teenage boy. Now, without his godly powers, the four-thousand-year-old deity must learn to survive in the modern world until he can somehow find a way to regain Zeus’s favor.

But Apollo has many enemies—gods, monsters, and mortals who would love to see the former Olympian permanently destroyed. Apollo needs help, and he can think of only one place to go . . . an enclave of modern demigods known as Camp Half-Blood.
Rick Riordan, dubbed “storyteller of the gods” by Publishers Weekly, is the author of five #1 New York Times best-selling middle grade series with millions of copies sold throughout the world: Percy Jackson and the Olympians, The Heroes of Olympus, and the Trials of Apollo, based on Greek and Roman mythology; the Kane Chronicles, based on Ancient Egyptian mythology; and Magnus Chase and the Gods of Asgard, based on Norse mythology. Rick collaborated with illustrator John Rocco on two #1 New York Times best-selling collections of Greek myths for the whole family: Percy Jackson’s Greek Gods and Percy Jackson’s Greek Heroes. Rick lives in Boston, Massachusetts with his wife and two sons. Follow him on Twitter at @RickRiordan.

"A clash of mythic intrigues and centuries of pop culture to thrill die-hard and new fans alike."—<EM>Kirkus</EM>

"Riordan fans will find all of the key elements here: wisecracking narration, underdog kid turned hero (well, god turned underdog turned hero in this case), mythological core, and robust side characters who round out the field. This is familiar territory for Riordan, but the formula works so well, and Apollo is just so appealingly unpleasant, that there’s little to fault in this adventure."—<EM>Bulletin of the Center for Children's Books</EM>

"Riordan’s many fans will be thrilled with this return to the world of Percy Jackson and friends. . . This latest has Riordan’s signature wry narration, nonstop action, and mythology brought to life."—<EM>School Library Journal</EM>