Chasing the Ghost Bear: On the Trail of America’s Lost Super Beast (Paperback) 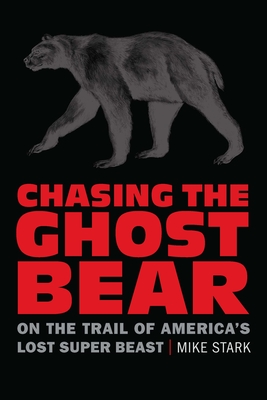 Chasing the Ghost Bear: On the Trail of America’s Lost Super Beast (Paperback)


Available at One of Our Locations
No animal shakes the human consciousness quite like a bear, and few compare to the giant short-faced bears that stalked North America during the Pleistocene. Even among the mammoths and saber-toothed cats, they were a staggering sight: on all fours, the biggest would stare a six-foot person in the face and weigh close to a ton. On hind legs they towered more than ten feet, with jaws powerful enough to crush skulls and snap bones like twigs.

The bears weren’t invincible, however. Despite their size, they were swept off the planet in a mysterious wave of Ice Age extinctions more than ten thousand years ago, then mostly forgotten. Chasing the Ghost Bear is Mike Stark’s journey into the bear’s enigmatic story—its life, disappearance, and rediscovery—and those trying to piece it together today. An engaging guide through his intrepid search, Stark’s story leads us from the La Brea Tar Pits in Los Angeles to a cornfield in Indiana, the far ends of the Arctic, the plains of Texas, and the swamps of Florida.

Part natural history, part travelogue, and part meditation on extinction and loss, Chasing the Ghost Bear returns these magnificent beasts to their rightful place in our understanding of the world just an epoch past.

Mike Stark is a former reporter for the Associated Press and the Billings Gazette and is the author of Wrecked in Yellowstone: Greed, Obsession, and the Untold Story of Yellowstone’s Most Infamous Shipwreck. He lives in Tucson, Arizona, and is the creative director for the Center for Biological Diversity.

"This book is journalism at its best."—Vernon Schmid, RoundUp Magazine

"A must-have for anyone with an interest in prehistoric bears!"—Birdbooker Report

"Readers with an interest in paleontology, zoology, or ecology will find this book fascinating. Those unfamiliar with these disciplines may find their curiosity piqued by opening the book."—J. Kemper Campbell, Lincoln Journal Star

“Thank heavens for Mike Stark for rummaging around in creepy caves, unearthing remote museum curators, and otherwise doing the far-flung homework needed to bring us this compelling elegy to one of prehistoric North America’s most spectacular carnivores.”—Paul Schullery, author of Lewis and Clark among the Grizzlies and The Bear Doesn’t Know

“A finely crafted mosaic of natural history, historical drama, and personal odyssey—seasoned with musings about the impermanence of life. . . . Mike Stark has managed to bring back to life not only this fascinating animal—Arctodus simus, the giant short-faced bear—but also the paleontologists who risked life and limb pursuing its scattered remains.”—David Mattson, former longtime grizzly bear scientist for the National Park Service and U.S. Geological Survey