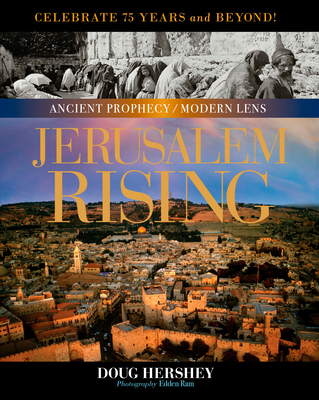 Thousands of years ago, the prophet Zechariah foretold that the once-revered city of Jerusalem would again shake off its dust and be revived in peace and security. He predicted it would not only become a center of thriving life and seat of international influence but also the place where God himself will return to dwell.

This stunning new photo-comparison book and follow-up to Israel Rising documents the long-awaited and ongoing restoration of a city "set in the center of the nations" (Ezekiel 5:5). From its famed walls and gates to the beloved Old City and the new city rising up around it, view some of the oldest photos of Jerusalem ever taken (starting in the 1840s) and see them re-created from the same perspective today―some for the first time ever.

Author Doug Hershey and adventure-travel photographer Edden Ram gained exclusive access to storied vantage points to reshoot the exact angles of these stunning and seldom-seen historical photos. The result is an awe-inspiring and groundbreaking collection that will captivate hearts and reveal the accuracy of the prophet's words. The book also features fascinating insights into Jerusalem's first photographers and firsthand accounts from pilgrims, locals, and would-be conquerors that capture the longing and desire for this treasured city, spanning almost 2,000 years.

Indeed, the reawakening of the City of Peace is at hand.