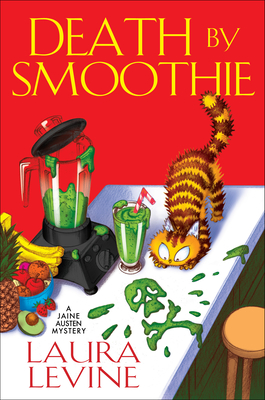 This is book number 19 in the A Jaine Austen Mystery series.

It’s the funny side of homicide in acclaimed TV comedy writer and novelist Laura Levine’s newest mystery featuring Jaine Austen and her snarky cat, Prozac, as a murder from the past comes back to haunt the Hollywood writer-for-hire!

Freelance writer Jaine Austen is all too familiar with the short-lived sitcom I Married a Zombie—she once solved the murder of its star, Cryptessa Muldoon. But in true zombie fashion, Cryptessa is back from the grave—sort of—courtesy of a new theatrical production, and murder is on the bill once more…

The Bewitched knockoff I Married a Zombie may have flopped in its day, but it’s got a devoted cult following. Jaine is delighted when one of those rabid fans hires her as script doctor for his new play based on the show—until she reads the awful script and meets Misty, the actress who’ll be playing Cryptessa’s role. Misty has Audrey Hepburn’s doe eyes but not a smidgen of her ability. Yet she can certainly act the diva, demanding a special smoothie every day at 3pm. Meanwhile, Jaine is grappling with another spoiled female—her uncooperative cat, Prozac, who’s refusing to be wrangled into a kitty harness for outside walks.

When someone spikes Misty’s signature drink with a fatal shot of rat poison, the cast of suspects extends far beyond the theater. What Misty lacked in talent she made up for in enemies. Everyone Jaine talks to maintains their innocence, but one of them is clearly only playing the part. And it’s up to Jaine to figure out who, before a killer schedules an encore performance . . .
Laura Levine is the author of the Jaine Austen Mystery series and a comedy writer whose television credits include The Bob Newhart Show, Laverne & Shirley, The Love Boat, The Jeffersons and Three’s Company. She lives in Los Angeles and can be found online at JaineAustenMysteries.com.