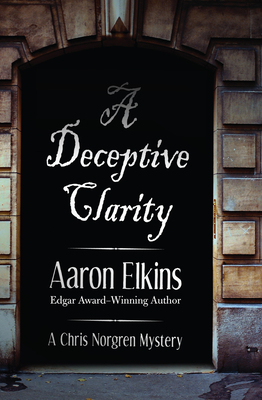 This is book number 1 in the Chris Norgren Mysteries series.

An American museum curator in Berlin must find a fake painting--and a real killer--in this mystery from the Edgar Award-winning author of Switcheroo. Chris Norgren, museum curator and Renaissance art expert, heads to Berlin to assist in mounting a sensational exhibit: The Plundered Past--twenty priceless Old Masters looted by the Nazis, thought for decades to be lost forever, and only recently rediscovered. But things quickly get out of hand when Chris's patrician, fastidious boss, after sensing a forgery in the lot, turns up dead the very next day--on the steps of a dismal Frankfurt brothel, of all places. Now, Chris faces a daunting task: finding a counterfeit artwork among the masterpieces--and an all-too-real killer whose sights are now set on him. A Deceptive Clarity is the first in the Chris Norgren Mysteries by the multiple award-winning creator of the Gideon Oliver "Skeleton Detective" novels--a celebrated master who "thoroughly understands the art of the murder mystery" (The Philadelphia Inquirer).

Aaron Elkins is a former anthropologist and professor who has been writing mysteries and thrillers since 1982. His major continuing series features forensic anthropologist-detective Gideon Oliver, "the Skeleton Detective." There are fifteen published titles to date in the series. The Gideon Oliver books have been (roughly) translated into a major ABC-TV series and have been selections of the Book-of-the-Month Club, the Literary Guild, and the Readers Digest Condensed Mystery Series. His work has been published in a dozen languages. Mr. Elkins won the 1988 Edgar Award for best mystery of the year for Old Bones, the fourth book in the Gideon Oliver Series. He and his cowriter and wife, Charlotte, also won an Agatha Award, and he has also won a Nero Wolfe Award. Mr. Elkins lives on Washington's Olympic Peninsula with Charlotte.