Pepe and the Parade: A Celebration of Hispanic Heritage (Hardcover) 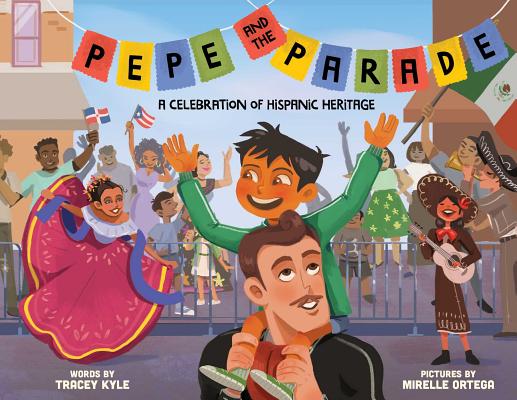 Pepe and the Parade: A Celebration of Hispanic Heritage (Hardcover)


Ships to Our Store in 1-5 Days
Join Pepe as he celebrates his Mexican-American heritage by participating in a Hispanic Day parade. Children will delight in seeing many Hispanic cultures proudly honored in this joyous picture book.

Pepe wakes up energized to attend his first Hispanic Day parade. With new food to taste, music to dance to, and a parade to watch, Pepe couldn't be more excited to celebrate and share his Hispanic heritage. Many of Pepe's friends also attend the festival, celebrating their own Hispanic ties. Mexican, Dominican, Panamanian, Colombian, Honduran, Nicaraguan, Chilean, Puerto Rican, Salvadoran, Guatemalan, and Cuban cultures are all represented in the parade. A day filled with joy and pride, Pepe and the Parade is a jubilant celebration of culture and identity.

With Spanish words effortlessly included throughout, this title is a great introduction to the Spanish language. A glossary of Spanish words, complete with English translations, and an educational author's note provide useful tools for further learning and discussion.
Tracey Kyle is a children's book author and an eighth-grade Spanish teacher. She studied in Madrid, which inspired her to write her first picture book, Gazpacho for Nacho. Tracey is also the author of the stunning picture book, A Paintbrush for Paco. When she's not writing lesson plans or working on a new story, she loves to read, cook, and practice yoga. She lives in Virginia with her husband and two cats. Learn more about Tracey at traceykyle.com

Mirelle Ortega is a Mexican illustrator and writer for kidlit and Animation based in Los Angeles, CA. She's created covers for award winning middle grade series such as From The Desk of Zoe Washington, Cece Rios and Love Sugar Magic, artwork for acclaimed chapter books series such as The Mythics, Vote For Effie and Mermaids Rock, and vibrant illustrations for picture books like Small Room, Big Dreams, Pepe and the Parade, and her author/illustrator debut Magic: Once Upon a Faraway Land.
Pepe wakes up early to participate in the Hispanic Day Parade. He can't wait to join his friends in celebration of his culture while enjoying delicious food from various countries. His family joins in on the festivities by dressing in native Mexican costumes; Mami in her flowery falda, Papi in his mariachi outfit, and Abuelo in his sombrero. As the parade begins, Pepe sees his friends from school. They represent Columbia, Honduras, Ecuador, San Salvador, and pretty much all of the Central and Latin American countries. The author provides information on Hispanic Heritage Month, including the differences in using the terms Hispanic and Latino. A glossary of terms provides a pronunciation guide of the Spanish words that are interspersed throughout the rhyming text. VERDICT With so many cultures introduced in this pleasant picture book with lively comic-style illustrations, readers may be inspired to explore a particular culture in depth.
— School Library Journal

All races and geographical areas are represented, from North America to Central America, the Caribbean, and South America. The bright and vivid colors add a festive layer to the illustrations, and the rhyming text is peppered with Spanish words that are defined in a glossary...the bright palette and uniqueness of subject warrants a space on picture-book shelves.
— Booklist