The 8-Week Blood Sugar Diet: How to Beat Diabetes Fast (and Stay Off Medication) (Paperback) 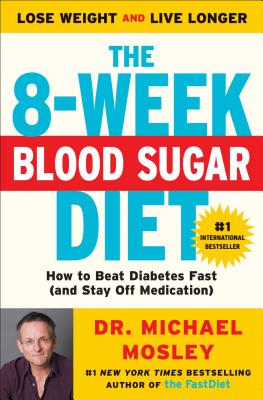 The 8-Week Blood Sugar Diet: How to Beat Diabetes Fast (and Stay Off Medication) (Paperback)

The 8-Week Blood Sugar Diet is a radical new approach to the biggest health epidemic threatening us today...

Our modern diet, high in low-quality carbohydrates, is damaging our bodies—producing a constant overload of sugar in our bloodstream that clogs up our arteries and piles hidden fat into our internal organs. The result has been a doubling in the number of type 2 diabetics, as well as a surge in those with a potentially hazardous condition—prediabetes. It is now known that even moderately elevated blood sugar levels can trigger heart disease, stroke, dementia, and cancer.

But scientists have recently demonstrated that you can prevent and even reverse type 2 diabetes with a simple change in diet and lifestyle. Drawing on the work of Dr. Roy Taylor—one of the UK’s foremost diabetes experts—and his own experience as a one-time diabetic, Dr. Michael Mosley presents a groundbreaking, science-based, 8-week plan for diabetics who want to reverse their condition (and then stay off medication). He also offers a more flexible regime for people interested in the extensive health benefits to be gained from lowering their blood sugar levels and shedding dangerous fat.

As Dr. Mosley says, it is never too late to act.
Dr Michael Mosley is the #1 New York Times bestselling author of The FastDiet, FastExercise, FastLife, The 8-Week Blood Sugar Diet, The Clever Gut Diet, The Fast800 Diet, and Covid-19. Dr. Mosley trained to be a doctor at the Royal Free Hospital in London before joining the BBC, where he spent three decades as a science journalist and executive producer. Now freelance, he is a well-known television personality and has won numerous television awards, including an RTS (Royal Television Award), and was named Medical Journalist of the Year by the British Medical Association.