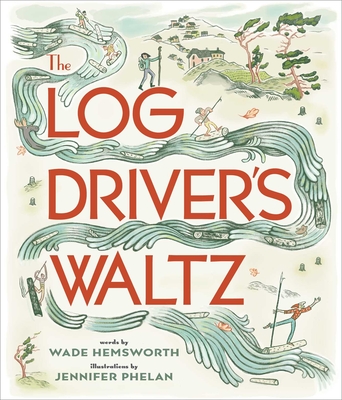 
Ships to Our Store in 1-5 Days
A beautiful, contemporary picture book adaptation of a beloved Canadian classic.

Based on the perennially popular Canadian folk song and animated short film of the same name, The Log Driver’s Waltz showcases a spunky, independent young woman whose parents are keen for her to marry. The town’s well-to-do doctors, merchants, and lawyers try to impress her, but it’s the humble log driver—with his style, grace, and joie de vivre—who captures her attention. When she and the log driver finally meet on the dance floor, their joy leaps off the page.

With homages to the original film, and celebrating the flora, fauna, and folk art of this great land, The Log Driver’s Waltz brings a hallmark of Canadian childhood to life.
Wade Hemsworth was a Canadian folk singer and songwriter, most notably the creator of “The Black Fly Song,” and, of course, “The Log Driver’s Waltz.” After Hemsworth’s passing in 2002, Governor General Adrienne Clarkson declared his songs “so much a part of our folklore...that we didn’t realize anyone had written them.”

Jennifer Phelan is an acclaimed illustrator with published works in American Illustration and 3x3. Her first children’s book, Hey, Boy was a New York Times Best Illustrated Children’s Book of 2017. She lives in Toronto. Learn more at J-Phelan.com.
“A thoughtful, female-driven interpretation of the classic folk song. . . . [E]ach illustration looks subtly well loved, like it has been folded up and carried around in a pocket all day. The colour palette is snug and homey.”
— Quill & Quire