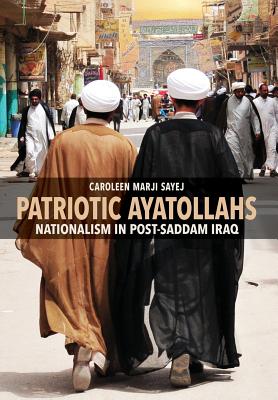 Patriotic Ayatollahs explores the contributions of senior clerics in state and nation-building after the 2003 Iraq war. Caroleen Sayej suggests that the four so-called Grand Ayatollahs, the highest-ranking clerics of Iraqi Shiism, took on a new and unexpected political role after the fall of Saddam Hussein.

Drawing on previously unexamined Arabic-language fatwas, speeches, and communiqu's of Iraq's four grand ayatollahs, this book analyzes how their new pronouncements and narratives shaped public debates after 2003. Sayej argues that, contrary to standard narratives about religious actors, the Grand Ayatollahs were among the most progressive voices in the new Iraqi nation. She traces the transformative position of Ayatollah Sistani as the guardian of democracy after 2003. Sistani was, in particular, instrumental in derailing American plans that would have excluded Iraqis from the state-building process--a remarkable story in which an octogenarian cleric takes on the United States over the meaning of democracy.

Patriotic Ayatollahs' counter-conventional argument about the ayatollahs' vision of a nonsectarian nation is neatly realized. Through her deep knowledge and long-term engagement with Iraqi politics, Sayej advances our understanding of how the post-Saddam Iraqi nation was built.

Caroleen Marji Sayej teaches government and international relations at Connecticut College. She is co-editor of The Iraq Papers.