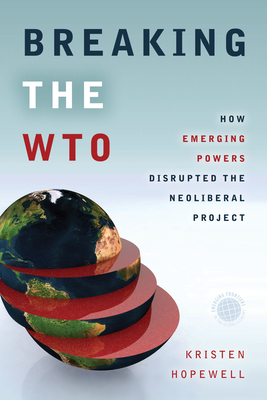 The world economic order has been upended by the rise of the BRIC nations and the attendant decline of the United States' international influence. In Breaking the WTO, Kristen Hopewell provides a groundbreaking analysis of how these power shifts have played out in one of the most important theaters of global governance: the World Trade Organization.

Hopewell argues that the collapse of the Doha Round negotiations in 2008 signals a crisis in the American-led project of neoliberal globalization. Historically, the U.S. has pressured other countries to open their markets while maintaining its own protectionist policies. Over the course of the Doha negotiations, however, China, India, and Brazil challenged America's hypocrisy. They did so not because they rejected the multilateral trading system, but because they embraced neoliberal rhetoric and sought to lay claim to its benefits. By demanding that all members of the WTO live up to the principles of free trade, these developing states caused the negotiations to collapse under their own contradictions. Breaking the WTO probes the tensions between the WTO's liberal principles and the underlying reality of power politics, exploring what the Doha conflict tells us about the current and coming balance of power in the global economy.

Kristen Hopewell is Senior Lecturer in International Political Economy at the University of Edinburgh.