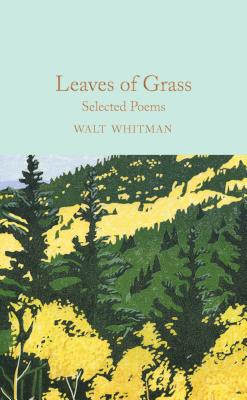 Leaves of Grass is Walt Whitman’s glorious poetry collection, first published in 1855, which he revised and expanded throughout his lifetime. It was ground-breaking in its subject matter and in its direct, unembellished style.

Part of the Macmillan Collector’s Library; a series of stunning, clothbound, pocket sized classics with gold foiled edges and ribbon markers. These beautiful books make perfect gifts or a treat for any book lover. This edition is edited and introduced by Professor Bridget Bennett.

Whitman wrote about the United States and its people, its revolutionary spirit and about democracy. He wrote openly about the body and about desire in a way that completely broke with convention and which paved the way for a completely new kind of poetry. This new collection is taken from the final version, the Deathbed edition, and it includes his most famous poems such as ‘Song of Myself’ and ‘I Sing the Body Electric’.

Walt Whitman was an American poet, essayist, journalist, and humanist. He was a part of the transition between Transcendentalism and realism, incorporating both views in his works. Whitman is among the most influential poets in the American canon, often called the "father of free verse".