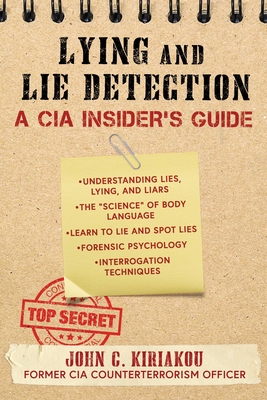 
Ships to Our Store in 1-5 Days
A foolproof guide both to lying and to detecting deception,Lying and Lie Detection: A CIA Insider's Guide will teach you how the pros can tell if and when somebody is lying.

People lie all the time. Studies show that the average American lies between six and twenty times a day.  Most lies are of the “little white” variety or are meant to spare a person’s feelings. But what about the big lies?  What about the consequential ones? You have a right to know when somebody is lying to you.

Now, imagine if you had the tools to spot a lie from the truth—a guide to perfect your sixth sense. Whether it's finding out if you truly got the job, unmasking an infidelity, or a simple recommendation, you will no longer have to spend hours, days, or even weeks pondering about it.

Through the easy-to-follow instructions and professional anecdotes in Lying and Lie Detection: A CIA Insider's Guide, you’ll learn to lie and spot lies from John Kiriakou, a former CIA counterterrorism officer and senior investigator for the Senate Foreign Relations Committee responsible for the capture of Abu Zubaydah.

Remember, CIA operations officers are trained to lie. They lie all the time. When they are working undercover, they are actually living a lie. With the CIA as a teacher, you’ll learn how to tell.

John Kiriakou is a former CIA operative and senior investigator for the Senate Foreign Relations Committee. A target of the Obama administration’s war on whistleblowers, he remains the only US official to serve time behind bars after revelations of CIA “enhanced interrogation” practices, despite openly opposing the torture program. He maintains that his case was about exposing torture, not leaking information, adding, he “would do it all over again.” He currently resides in Arlington, Virginia, with his family.