First Platoon: A Story of Modern War in the Age of Identity Dominance (Hardcover) 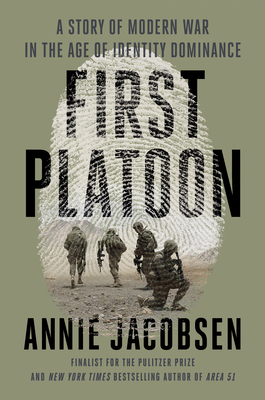 First Platoon: A Story of Modern War in the Age of Identity Dominance (Hardcover)


Available at One of Our Locations
A powerful story of war in our time, of love of country, the experience of tragedy, and a platoon at the center of it all.

This is a story that starts off close and goes very big. The initial part of the story might sound familiar at first: it is about a platoon of mostly nineteen-year-old boys sent to Afghanistan, and an experience that ends abruptly in catastrophe. Their part of the story folds into the next: inexorably linked to those soldiers and never comprehensively reported before is the U.S. Department of Defense’s quest to build the world’s most powerful biometrics database, with the ability to identify, monitor, catalog, and police people all over the world.

First Platoon is an American saga that illuminates a transformation of society made possible by this new technology. Part war story, part legal drama, it is about identity in the age of identification. About humanity—physical bravery, trauma, PTSD, a yearning to do right and good—in the age of biometrics, which reduce people to iris scans, fingerprint scans, voice patterning, detection by odor, gait, and more. And about the power of point of view in a burgeoning surveillance state.

Based on hundreds of formerly classified documents, FOIA requests, and exclusive interviews, First Platoon is an investigative exposé by a master chronicler of government secrets. First Platoon reveals a post–9/11 Pentagon whose identification machines have grown more capable than the humans who must make sense of them. A Pentagon so powerful it can cover up its own internal mistakes in pursuit of endless wars. And a people at its mercy, in its last moments before a fundamental change so complete it might be impossible to take back.
Annie Jacobsen is the author of the Pulitzer Prize finalist in history The Pentagon’s Brain, the New York Times bestsellers Area 51 and Operation Paperclip, and other books. She was a contributing editor at the Los Angeles Times Magazine. A graduate of Princeton University, she lives in Los Angeles with her husband and two sons.
Praise for First Platoon

“Jacobsen follows the lives of Americans told to gather that data in Afghanistan—and she questions what the U.S. government means to do with it all.”—NPR

“A deeply researched book about modern warfare. A startling prompt to stop worrying about fabricated conspiracy theories and to consider for a moment actual threats to privacy.”—Houston Chronicle

“First Platoon tells two parallel stories that will keep those of us concerned about civil liberties up at night. Jacobsen dives into the troubling tale of 1st Lt. Clint Lorance, the disgraced former military leader who ordered the murder of Afghan civilians in one of the ugliest events for the U.S. military in the continuous wars since 9/11. She takes the story far beyond Lorance’s controversial pardon by President Donald Trump, though, detailing a largely unreported secretive program to catalog the personal and physical information of 80% of the Afghan population in a quest for ‘identity dominance.'”—The Seattle Times

“This fascinating book functions as modern history but also a cautionary tale about the heavily gray area of the War on Terror and its tactics. This is grade A Journalism.” —San Francisco City Book Review (five star review)