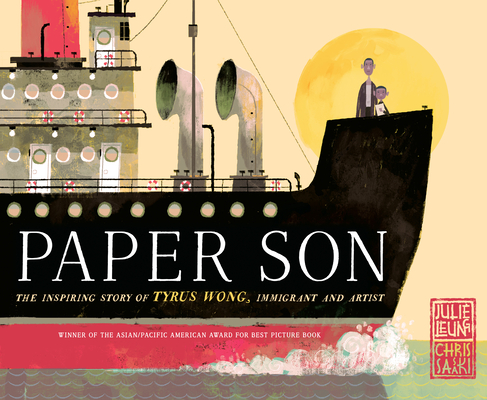 
Ships to Our Store in 1-5 Days
Winner of the American Library Association's 2021 Asian/Pacific American Award for Best Picture Book!

Before he became an artist named Tyrus Wong, he was a boy named Wong Geng Yeo. He traveled across a vast ocean from China to America with only a suitcase and a few papers. Not papers for drawing--which he loved to do--but immigration papers to start a new life. Once in America, Tyrus seized every opportunity to make art, eventually enrolling at an art institute in Los Angeles. Working as a janitor at night, his mop twirled like a paintbrush in his hands. Eventually, he was given the opportunity of a lifetime--and using sparse brushstrokes and soft watercolors, Tyrus created the iconic backgrounds of Bambi.

Julie Leung and Chris Sasaki perfectly capture the beautiful life and work of a painter who came to this country with dreams and talent--and who changed the world of animation forever.
JULIE LEUNG is the author of the Mice of the Round Table series, including A Tail of Camelot, Voyage to Avalon, and most recently, Merlin's Last Quest. This is her first picture book. In her free time, she enjoys furtively sniffing books at bookstores and winning obscure board games. Originally from Atlanta, she now lives in New York City, where she works as a marketing director at Del Rey Books. Visit her on the web at jleungbooks.com and follow her on Twitter at @jleungbooks.

CHRIS SASAKI is a former character designer and illustrator for Pixar Animation Studios, where he has designed characters for Monsters University and Inside Out. His work has been featured at Gallery Nucleus, on Cartoon Brew, in the New York Times, and in the Society of Illustrators annual. He lives in Oakland, California. Visit him on the web at csasaki.com.
"“A beautiful, must-read tribute to hardworking families and the magic they create." —Kirkus, starred review

“Confidential, fluid prose deftly captures the stress and strangeness of his immigration experience and his artistic blossoming and impact…. A window into the troubled history of transpacific immigration and a look at a long-undersung contributor to our visual landscapes.” —Bulletin

“A meaningful portrayal of one working-class experience and an image of a loving, hardworking family.”  —Publishers Weekly