In Conclusion, Don't Worry About It (Hardcover) 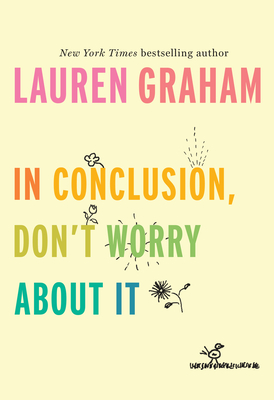 In Conclusion, Don't Worry About It (Hardcover)


Ships to Our Store in 1-5 Days
NEW YORK TIMES BESTSELLER • Advice for graduates and reflections on staying true to yourself from the beloved Gilmore Girls actress and New York Times bestselling author of the memoir Talking as Fast as I Can and the novel Someday, Someday, Maybe.

“If you’re kicking yourself for not having accomplished all you should have by now, don’t worry about it. Even without any ‘big’ accomplishments yet to your name, you are enough.”

In this expansion of the 2017 commencement speech she gave at her hometown Langley High, Lauren Graham, the beloved star of Gilmore Girls and Parenthood, reflects on growing up, pursuing your dreams, and living in the here and now. “Whatever path you choose, whatever career you decide to go after, the important thing is that you keep finding joy in what you’re doing, especially when the joy isn’t finding you.” In her hilarious, relatable voice, Graham reminds us to be curious and compassionate, no matter where life takes us or what we’ve yet to achieve. Grounded and inspiring—and illustrated throughout with drawings by Graham herself—here is a comforting road map to a happy life.

“I’ve had ups and downs. I’ve had successes and senior slumps. I’ve been the girl who has the lead, and the one who wished she had the bigger part. The truth? They don’t feel that different from each other.”
Lauren Graham is an actor, writer, and producer best known for her roles on the critically acclaimed series Gilmore Girls and Parenthood. She is also the New York Times bestselling author of Someday, Someday, Maybe and Talking as Fast as I Can. Graham has performed on Broadway and appeared in such films as Bad Santa, Because I Said So, and Max. She holds a BA in English from Barnard College and an MFA in acting from Southern Methodist University. She lives in New York and Los Angeles.