Itzel and the Ocelot (Hardcover) 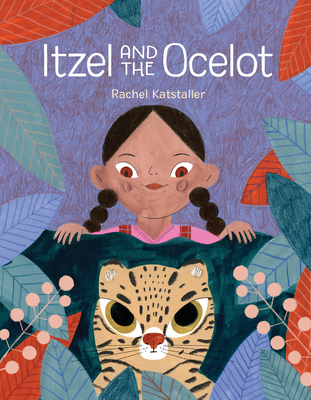 Itzel and the Ocelot (Hardcover)

A gorgeous picture book inspired by a traditional Central American Indigenous story about a snake with the power to bring the rain, told in lyrical language and evocative art, and subtly conveying an environmental theme.

Itzel listens as her nana tells the story of when the giant snake would be awakened from its sleep: “And first with a whisper that would rustle the leaves, and then with a deep thunderous cry, the giant snake would bring the arrival of the rainy season.” But now, since many no longer believe in the snake, her nana says, “It has returned to the place where the water is born.” Now, Itzel and her nana are desperate for rain to water their bone-dry crops. So Itzel decides she must find and awaken the snake herself. She sets out in the night alone, but soon she is joined by an ocelot, and a bevy of other jungle creatures in need of the rain. And Itzel worries, is she leading them on a fruitless journey?

This rich, beautifully told folk tale from author and illustrator Rachel Katstaller was inspired by a traditional story she heard growing up in El Salvador. The story features words from an Indigenous language, Nawat, that was once on the verge of extinction and animals native to Central America, including the ocelot who becomes Itzel’s guardian spirit. Lush dark-toned illustrations play with shadow and light to evoke the thrilling feel of a night spent deep in the jungle, giving the book a magical quality. An author’s note provides further context and a glossary of Spanish and Nawat words. A perfect choice for character education lessons on courage, optimism and perseverance, with an environmental message sure to resonate with today’s readers.

Rachel Katstaller is a children’s book illustrator from El Salvador, a tiny country in the tropics of Central America. She now lives and works in a studio perched in the Austrian Alps, where she daydreams about eating croissants in Paris. Her cat, Hemingway, was named after a famous writer who was once mentored by Gertrude Stein.

This story encourages readers to hold dear to stories and tales of the past, as they may just be the key to the future.—Children's Literature

Recommended as an addition to a library's shelves of tales from around the world.—CM Magazine