Ireland: A SOCIAL HISTORY: From The Celts To The Foundations Of Unionism And Republicanism (Paperback) 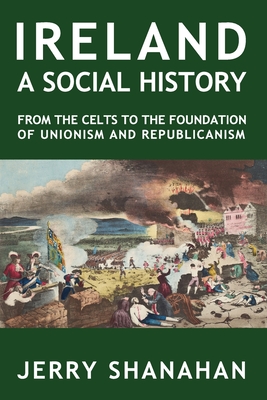 In a year which celebrates the 100th Anniversary of the Irish War of Independence this book is entirely relevant.

This comprehensive, meticulously-researched book offers readers (both familiar and unfamiliar with Irish history) an opportunity to review and re-examine their knowledge - from the Celts of the first century through to the foundation of Unionism and Republicanism in the latter part of the 18th and early 19th centuries. It seeks to explore the narrative that readers are generally exposed to in the revisionist version of Irish history.

As its title suggests, Ireland a Social History presents from a social perspective and invites the reader to reconsider the mostly accepted narratives which often represent the dominant class understanding of Irish History or as Gramsci observed; social constructs that benefit only the ruling classes - their view becoming the accepted view.

Jerry Shanahan spent the past seven years as a Worker Member of the Irish Labour Court which resolves industrial relations disputes and adjudicates on employment law. Prior to that he was National Officer with the trade union Unite, on the Executive Committee of the Irish Congress of Trade Unions, and a former President of the Dublin Council of Trade Unions. He has had a lifetime interest in politics including the Connolly Youth Movement, Irish Communist Party, the Irish Labour Party, and was Chair of Labour Party trade unions. He also served on the Board of the National Economic and Social Council and the European Foundation on Living and Working Conditions. He holds a professional diploma in employment law from UCD and an MA from Keele University.