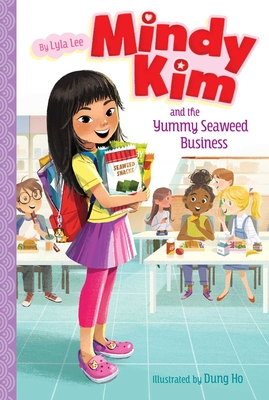 This is book number 1 in the Mindy Kim series.

Fresh Off the Boat meets Junie B. Jones in this first novel in an adorable new chapter book series about Mindy Kim, a young Asian American girl who is starting a snack business!

Mindy Kim just wants three things:
1. A puppy!
2. To fit in at her new school
3. For her dad to be happy again

But, getting all three of the things on her list is a lot trickier than she thought it would be. On her first day of school, Mindy’s school snack of dried seaweed isn’t exactly popular at the lunch table. Luckily, her new friend, Sally, makes the snacks seem totally delicious to Mindy’s new classmates, so they decide to start the Yummy Seaweed Business to try and raise money for that puppy!

When another student decides to try and sabotage their business, Mindy loses more than she bargained for—and wonders if she’ll ever fit in. Will Mindy be able to overcome her uncertainty and find the courage to be herself?
Lyla Lee is an author of books for children and young adults. In addition to the Mindy Kim series, she is the author of I’ll Be the One and the upcoming Flip the Script for teens. Born in South Korea, she’s since then lived in various parts of the United States, including California, Florida, and Texas. Inspired by her English teacher, she started writing her own stories in fourth grade and finished her first novel at the age of fourteen. After working in Hollywood and studying psychology and cinematic arts at the University of Southern California, she now lives in Dallas, Texas. When she is not writing, she is teaching kids or playing with her dog, Eiva the Siberian Husky.

Dung Ho was born and raised in Hue, Vietnam, where she studied graphic design at the Hue University College of Arts. After graduating, she worked in the design and advertising industries before discovering a great passion for illustration and picture books and becoming a freelance illustrator. Currently, she lives and works in Ho Chi Minh, Vietnam. She is the illustrator of the New York Times bestselling picture book Eyes That Kiss in the Corners.  When not drawing, she enjoys cooking and watching movies.