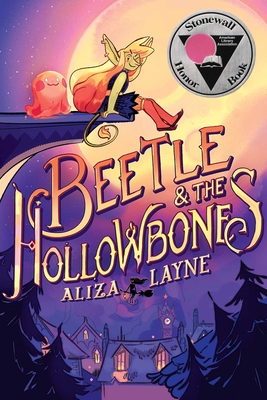 
Available at One of Our Locations
A Stonewall Honor Book

An enchanting, riotous, and playfully illustrated debut graphic novel following a young goblin trying to save her best friend from the haunted mall—perfect for fans of Steven Universe and Adventure Time.

In the eerie town of ‘Allows, some people get to be magical sorceresses, while other people have their spirits trapped in the mall for all ghastly eternity.

Then there’s twelve-year-old goblin-witch Beetle, who’s caught in between. She’d rather skip being homeschooled completely and spend time with her best friend, Blob Glost. But the mall is getting boring, and B.G. is cursed to haunt it, tethered there by some unseen force. And now Beetle’s old best friend, Kat, is back in town for a sorcery apprenticeship with her Aunt Hollowbone. Kat is everything Beetle wants to be: beautiful, cool, great at magic, and kind of famous online. Beetle’s quickly being left in the dust.

But Kat’s mentor has set her own vile scheme in motion. If Blob Ghost doesn’t escape the mall soon, their afterlife might be coming to a very sticky end. Now, Beetle has less than a week to rescue her best ghost, encourage Kat to stand up for herself, and confront the magic she’s been avoiding for far too long. And hopefully ride a broom without crashing.
Aliza Layne is a cartoonist, illustrator, and storyteller. She is the creator of Demon Street, a long-form fantasy webcomic for all ages. Her Halloween costumes have elicited the phrases “theatrical,” “don’t you think you’re going a little overboard,” and “oh, we remember you from last year.” Beetle and the Hollowbones is her first graphic novel and a Stonewall Honor Book. Visit Aliza at AlizaLayne.com.

Aliza Layne is a cartoonist, illustrator, and storyteller. She is the creator of Demon Street, a long-form fantasy webcomic for all ages. Her Halloween costumes have elicited the phrases “theatrical,” “don’t you think you’re going a little overboard,” and “oh, we remember you from last year.” Beetle and the Hollowbones is her first graphic novel and a Stonewall Honor Book. Visit Aliza at AlizaLayne.com.
* "This splashy fantasy graphic novel blends rollicking adventure with inclusive teen themes. Though bustling with goblins, witches, ghosts, and skeletons, this beautifully drawn graphic novel addresses important questions facing even mortal kids. . . . Diversity is a strength in this female-driven text, which features a tenderly portrayed LGBTQ love story between Kat and Beetle. Wise older women act as mentors, body diversity is casually positive, and Blob Ghost uses they/them pronouns throughout. . . . This inclusive fantasy adventure passes the Bechdel test with flying colors."
— Kirkus Reviews, Starred Review

* "Layne makes a stellar debut. Simultaneously gorgeous and goofy, the artwork is reminiscent of the animated series Bee and Puppycat and a delicious love letter to shoujo manga. Layne’s supernatural cast is fantastic, from green-skinned Beetle and her grandmother to Kat and Marla, ­respectively, skeletal cat and bird ­creatures. Characters’ LGBTQ identities, such as Beetle and Kat’s changing relationship, as well as the use of the they pronoun for Blob Ghost, are gently woven throughout the narrative. Relying on intersecting plotlines in lieu of a more straightforward romp, Layne conveys themes of independence, identity, and realization of one’s potential. VERDICT Action-packed yet heartfelt, short and sweet yet riveting, this one is not to be missed."

* "Layne grounds Beetle's bighearted adventure in earthly settings like the mall and Gran's cozy cottage, and she fills 'Allows Town with a gleeful array of fantastic creatures: no two are alike. Her vibrant, comical, and overall super-appealing art is a good match for sometimes-scary and high-octane scenes. Beetle's hero's journey has the adorably vulnerable Blob Ghost at its heart; many kids will also relate to the friendship-and-more story between Beetle and Kat. A high-spirited debut about learning to trust one's heart and instincts."
— Booklist, Starred Review

"Luminous art and creative panel placement make for a zippy read in this graphic novel, whose LGBTQIA+ representation is treated as matter-of-factly as its fantasy elements."