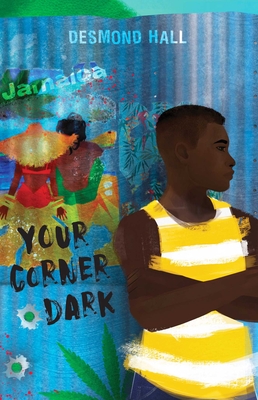 
Ships to Our Store in 1-5 Days
“One of those tales that ties you up, turns you inside-out, wrings you like a wet cloth.” —Jason Reynolds, New York Times bestselling author of Long Way Down

American Street meets Long Way Down in this searing and gritty debut novel that takes an unflinching look at the harsh realities of gang life in Jamaica and how far a teen is willing to go for family.

Things can change in a second:

The second Frankie Green gets that scholarship letter, he has his ticket out of Jamaica.

The second his longtime crush, Leah, asks him on a date, he’s in trouble.

The second his father gets shot, suddenly nothing else matters.

And the second Frankie joins his uncle’s gang in exchange for paying for his father’s medical bills, there’s no going back...or is there?

As Frankie does things he never thought he’d be capable of, he’s forced to confront the truth of the family and future he was born into—and the ones he wants to build for himself.
Desmond Hall was born in Jamaica, West Indies, and moved to Jamaica, Queens. He has worked as a high school biology and English teacher in East New York, Brooklyn; counseled teenage ex-cons after their release from Rikers Island; and served as Spike Lee’s creative director at Spike DDB. Desmond has served on the board of the Partnership for Drug-Free Kids and the Advertising Council and judged the One Show, the American Advertising Awards, and the NYC Downtown Short Film Festival. He’s also been named one of Variety magazine’s Top 50 Creatives to Watch. He’s the author of Your Corner Dark and Better Must Come. Desmond lives outside of Boston with his wife and two daughters.
"This is a novel that will be well-received by readers"
— School Library Connection

"Gritty and full of detail about life in Jamaica, this ­eye-opening novel will allow readers to identify with a teen doing his best in a difficult situation. VERDICT This novel will appeal to ­readers of Ibi ­Zoboi’s American Street and ­Jason ­Reynolds’s Long Way Down."

"Jamaican-born Hall’s highly readable, well-plotted fiction debut is distinguished by its Caribbean setting and use of Jamaican patois, which provides verisimilitude. These rich details support the story’s appealing characters, making for a compelling read."

Hall skillfully positions readers on an ethical edge. A cinema-worthy secondary cast, pull-no-punches posse war scenes, and of course a love interest will keep a diverse readership clutching their books and e-readers.

"A story of family, sacrifice, perseverance, and survival."
— Kirkus Reviews