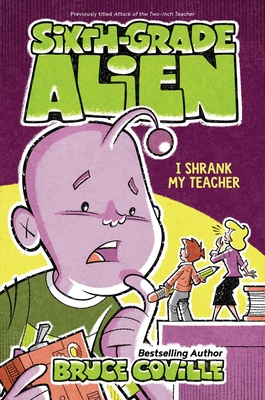 This is book number 2 in the Sixth-Grade Alien series.

Pleskit and Tim’s plan to prank a bully goes horribly awry in this second book of the hilarious, fast-paced, and accessible sci-fi series Sixth-Grade Alien from the bestselling author of Aliens Ate My Homework, Bruce Coville.

All Pleskit Meenom wants to do is fit in on his new planet. But bullies like his classmate Jordan Lynch make it clear he never will. Not even taking a trip to the mall and getting some Earth-style clothing is enough to stop Jordan’s teasing or blend in at school. After one dig too many from Pleskit’s bully, Pleskit and his best friend Tim decide to teach Jordan a lesson.

So they borrow a shrinking ray from the embassy. Shrinking rays are tricky machines, and this one turns out to be more than the boys can handle. Instead of cutting a mean kid down to size, they end up making Tim and their teacher Ms. Weintraub no bigger than a pair of pencils!

If word gets out of this misuse of alien technology, it could ruin Pleskit’s mission. But how can you hide the fact that you’ve shrunk your teacher?
Bruce Coville has published more than one hundred books, which have sold more than sixteen million copies. Among his most popular titles are My Teacher Is an Alien, Into the Land of the Unicorns, and The Monster’s Ring. Bruce also founded Full Cast Audio, a company that creates recordings of the best in children’s and young adult literature. He lives in Syracuse, New York, with his wife, Katherine. Visit him at BruceCoville.com.