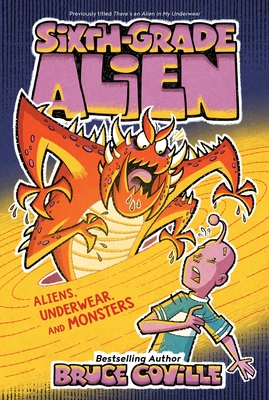 This is book number 11 in the Sixth-Grade Alien series.

Pleskit and Tim are the butt of the joke in this eleventh book in the hilarious, fast-paced, and accessible sci-fi series Sixth-Grade Alien from the bestselling author of Aliens Ate My Homework, Bruce Coville!

When Tim comes home and finds a two-foot-tall orange alien named Beebo Frimbat sitting on his desk, he knows he’s in for a hard time. After all, Beebo is a dedicated mischief maker who thinks trouble is the spice of life. But even Beebo’s past pranks don’t prepare Tim for finding his underwear flying from the school flagpole.

Still, it’s all in good fun. Or is it? Do Beebo’s pranks have anything to do with the plan to derail the mission of The Fatherly One? And is it really just an accident when Beebo locks Pleskit’s bodyguard in an alternate dimension populated by man-eating monsters?

Previously titled There’s an Alien in My Underwear.
Bruce Coville has published more than one hundred books, which have sold more than sixteen million copies. Among his most popular titles are My Teacher Is an Alien, Into the Land of the Unicorns, and The Monster’s Ring. Bruce also founded Full Cast Audio, a company that creates recordings of the best in children’s and young adult literature. He lives in Syracuse, New York, with his wife, Katherine. Visit him at BruceCoville.com.