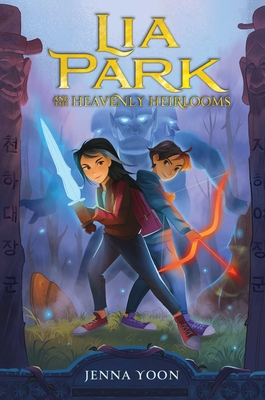 This is book number 2 in the Lia Park series.

Perfect for fans of the Gifted Clans and Aru Shah series, this thrilling second book of the middle grade fantasy Lia Park series sees Lia and Joon on a mission to protect important magical objects—and themselves—from a mysterious enemy.

Twelve-year-old Lia Park and her best friend, Joon, are now full-time students at International Magic Academy after defeating corrupt diviner Gaya, and their first assignment is an ambitious one. The evil nine-headed monster and King of Darkness, Jihaedaegukjeok, wants to destroy the three Heavenly Heirlooms that create fire and light to plunge the world into darkness and destroy humanity.

The heirlooms can only be destroyed if they are all together, so over time, they have been hidden carefully with magic. Except now, one of them is missing. Lia, Joon, and their classmates have been tasked with recovering the lost heirloom and bringing it to IMA for safekeeping. They expected the task to be difficult, but the number of obstacles the magic trainees run into makes Lia start to wonder if the sabotage could be coming from someone inside the school.
Jenna Yoon studied Art History at Wellesley College and received her master’s degree in Korean art history from Ewha Womans University. She’s lived about half her life in both Korea and the United States. When she’s not writing, Jenna loves to travel, find yummy eats, play board games, and take skin care very seriously. Currently, she lives in Austin, Texas, with her husband and two kids.