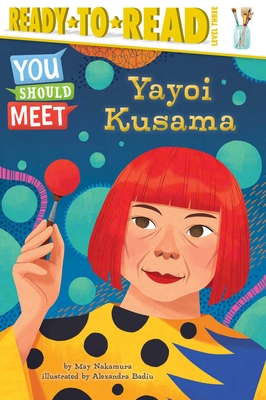 By May Nakamura, Alexandra Badiu (Illustrator)


Ships to Our Store in 1-5 Days
Get to know Yayoi Kusama, a Japanese artist known for her extensive use of polka dots and for her infinity installations, in this fascinating nonfiction Level 3 Ready-to-Read, part of a series of biographies about people “you should meet!”

Meet Yayoi Kusama. When Yayoi Kusama was a little girl, she told her parents she wanted to be an artist. Her parents forbade her and tore up her drawings. But that didn’t stop her. When she couldn’t afford art supplies, she used old paper sacks and mud to create her art. Eventually, she convinced her parents to let her go to art school and study painting. In 2006, she became the first Japanese woman to receive the Praemium Imperiale. It is one of the highest honors given by the Japanese imperial family. Ten years later, she received the Order of Culture, another prestigious award given to people who make important contributions to Japanese culture. Today, she is one of the most famous artists in the world.
May Nakamura writes and edits books for children. She grew up in the San Francisco Bay Area but now lives in New York City. She really likes eating maple donuts and playing hide and seek (but not at the same time)!

Alexandra S. Badiu is a Romanian children’s book illustrator and visual developer for animation. She participated in collaborative projects with the Harlem Globetrotters, Adult Swim, Hallmark Cards, and Kwippit app as a student. Her love of animation and books drove her decision to becoming a children’s book illustrator. Creating visual worlds and the ability to share it with children is her ultimate passion. Alexandra enjoys illustrating nature, fantasy, and science stories for children. She works digitally but practices and sketches traditionally to keep the natural aspect of her brush strokes intact.