How to Be Cooler than Cool (Hardcover) 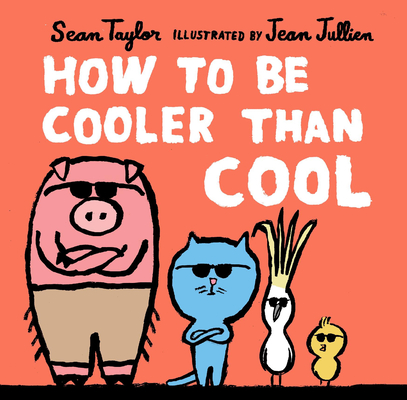 How to Be Cooler than Cool (Hardcover)


Available at One of Our Locations
The creators of Hoot Owl, Master of Disguise show that dark shades and daring antics don’t necessarily lead to instant coolness in a giggle-worthy send-up of trying too hard.

Look what Cat found on the playground! Sliding backward down the slide in these sunglasses is sure to make her look cool with extra cool on top . . . uh-oh! Of course, Cockatoo’s dancing on top of the seesaw wearing the glasses will definitely make him too cool for school . . . oh no! How about Pig’s standing up on the swing in the coveted shades? Drawn in by the silly story and the bold, graphic illustrations, kids will laugh out loud at the comeuppance of the animal poseurs and cheer for the savvy little chick who shows that coolness comes from just having regular old fun.
Sean Taylor is an award-winning author, storyteller, and teacher who has written more than forty books for young children, including Hoot Owl, Master of Disguise and I Want to Be in a Scary Story, both illustrated by Jean Jullien; A Brave Bear, illustrated by Emily Hughes; Don’t Call Me Choochie Pooh!, illustrated by Kate Hindley; and I Am Actually a Penguin, illustrated by Kasia Matyjaszek. Sean Taylor lives in England.

Jean Jullien is the illustrator of Hoot Owl, Master of Disguise and I Want to Be in a Scary Story, both by Sean Taylor. As a graphic designer, he works in a wide range of media, including illustration, photography, video, installation, and clothing, and his clients have included the New Yorker, New York magazine, the Guardian, and the Pompidou Center. Originally from France, he lives in London and exhibits worldwide.