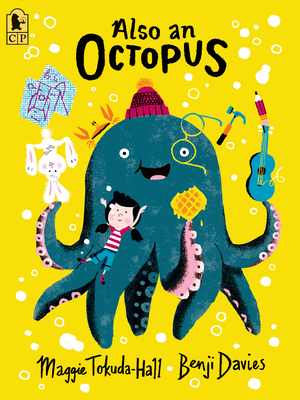 Even the most totally awesome story starts with a little bit of nothing. What happens next is up to you! A delightfully meta picture book that will set imaginations soaring.

It begins with an octopus who plays the ukulele. Since this is a story, the octopus has to want something—maybe to travel to faraway galaxies in a totally awesome purple spaceship. Then the octopus sets out to build a spaceship out of soda cans, glue, umbrellas, glitter, and waffles. OK, maybe the octopus needs some help, like from an adorable bunny friend, and maybe that bunny turns out to be . . . a rocket scientist? (Probably not.) But could something even more amazing come to pass? Debut author Maggie Tokuda-Hall, with the help of illustrator Benji Davies, sets up an endearingly funny story, then hands the baton to readers, who will be more than primed to take it away.
Maggie Tokuda-Hall has an MFA in writing from the University of San Francisco and a tendency to spill things. As a longtime children’s bookseller she has read her fair share of stories, and she is always hungry for more. Her favorite animal is an octopus, or else an elephant. Maggie Tokuda-Hall lives in San Francisco.

Benji Davies is the award-winning author-illustrator of many books for children, including the Bizzy Bear series. Benji Davies lives in London.
Debut author Tokuda-Hall offers a capricious crash course in the elements and boundless possibilities of story...freewheeling digital art keeps pace with the encouraging narration, and the concluding image—of a rocket scientist water-skiing atop a rhino while wearing a colander on her head—cements the idea that, when it comes to storytelling, anything is possible.
—Publishers Weekly

Funny and engaging, this book has an interactive quality that will inspire kids to imagine a story of their own.
—Booklist

The bubbly, appealing art has punchy humor and works as an ongoing conversation with the narration, bringing the fumbling but exciting progress of crafting a new story to life...This entertaining read-aloud will jump-start imaginations and create opportunities for thinking about existing tales as well as for making new ones.
—School Library Journal

A superfun story that completely engages the imagination (while actually teaching kids about constructing a good story), "Also an Octopus" is first rate in every way.
—Reading Eagle (from Kendal Rautzhan's "Books to Borrow")