Nala's World: One Man, His Rescue Cat, and a Bike Ride around the Globe (Paperback) 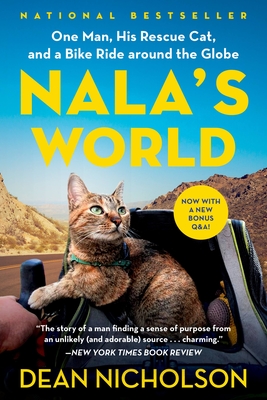 Nala's World: One Man, His Rescue Cat, and a Bike Ride around the Globe (Paperback)

By Dean Nicholson, Garry Jenkins (With)


Ships to Our Store in 1-5 Days
Discover the nationally bestselling, true story of a life-changing friendship between a man and his rescue cat, Nala, as they adventure together on a bike journey around the world -- from the Instagram phenomenon @1bike1world.
When 30-year-old Dean Nicholson set off from Scotland to cycle around the world, his aim was to learn as much as he could about our troubled planet. But he hadn't bargained on the lessons he'd learn from his unlikely companion.

Three months after leaving home, on a remote road in the mountains between Montenegro and Bosnia, he came across an abandoned kitten. Something about the piercing eyes and plaintive meowing of the bedraggled little cat proved irresistible. He couldn't leave her to her fate, so he put her on his bike and then, with the help of local vets, nursed her back to health.

Soon on his travels with the cat he named Nala, they forged an unbreakable bond -- both curious, independent, resilient and adventurous. The video of how they met has had 20 million views and their Instagram has grown to almost 750k followers -- and still counting!

Experiencing the kindness of strangers, visiting refugee camps, rescuing animals through Europe and Asia, Dean and Nala have already learned that the unexpected can be pretty amazing. Together with Garry Jenkins, writer with James Bowen of the bestselling A Street Cat Named Bob, Dean shares the extraordinary tale of his and Nala's inspiring and heart-warming adventure together.

Dean Nicholson was a manual labourer in his hometown of Dunbar, Scotland, when he set off in September 2018 to cycle around the globe. While cycling through the mountains south of Bosnia, he came across a scrawny grey-and-white kitten that had been scampering along the road, trying to keep up with his bike. This was the start of an unusual friendship, as the newly named Nala joined Dean on his travels.

Dean documented their adventures together on Instagram as @1bike1world, picking up not just hundreds and thousands of followers, but also attention from news media all over the world. Now at almost 750k followers, Dean and Nala have already travelled through Bosnia, Greece, Azerbaijan, Georgia and Turkey and been on the road together for hundreds and thousands of miles for just a little over ten months.

Nala's World is Dean's first book, and tells the story of how they met and their adventures on the road.
“There are moments of tension, like when Nala can’t be found for a whole morning, and profundity . . . The writing is more like people you just met at a hostel telling you about their travels after a few pints. . . Nicholson is at his best when he tells the story of a man finding a sense of purpose from an unlikely (and adorable) source…charming.”—New York Times Book Review

“A gorgeous book . . .  complete with photos that will melt your heart.”—The U.S. Sun

“Feel-good… who doesn’t love a good story about a cat who travels the world.”—Bicycling Magazine