The Ledger and the Chain: How Domestic Slave Traders Shaped America (Hardcover) 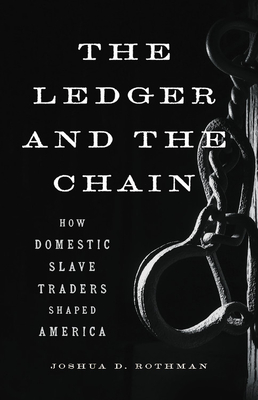 The Ledger and the Chain: How Domestic Slave Traders Shaped America (Hardcover)


Available at One of Our Locations
An award-winning historian reveals the harrowing forgotten story of America's internal slave trade—and its role in the making of America.

Slave traders are peripheral figures in most histories of American slavery. But these men—who trafficked and sold over half a million enslaved people from the Upper South to the Deep South—were essential to slavery's expansion and fueled the growth and prosperity of the United States.

In The Ledger and the Chain, acclaimed historian Joshua D. Rothman recounts the shocking story of the domestic slave trade by tracing the lives and careers of Isaac Franklin, John Armfield, and Rice Ballard, who built the largest and most powerful slave-trading operation in American history. Far from social outcasts, they were rich and widely respected businessmen, and their company sat at the center of capital flows connecting southern fields to northeastern banks. Bringing together entrepreneurial ambition and remorseless violence toward enslaved people, domestic slave traders produced an atrocity that forever transformed the nation.
Joshua D. Rothman is professor of history and chair of the department of history at the University of Alabama. He is the author of two prize-winning books, Flush Times and Fever Dreams and Notorious in the Neighborhood. He lives in Birmingham and Tuscaloosa, Alabama.
"A searing account of the reprehensible life’s work of Franklin and his remorseless business associates. Other scholars have produced accounts of the domestic slave trade. Mr. Rothman writes about slave traders, and puts an indelible face on their inhumanity."—Wall Street Journal

"Accounts of American slavery often overlook the central role of the traders who profited. Rothman’s history focuses on three of the biggest.”—New York Times Book Review

“Powerful … Rothman confounds the stereotype of the slave trader as scrappy outsider… [and] brilliantly captures the grotesque collision of dehumanization and sentimentality that shaped the worlds of Franklin and his associates.”—New York Review of Books

“Tremendous…[The Ledger and the Chain] intertwines a careful biography of a very successful business with unflinching attention to the monstrosity that business was built upon.”—Slate

“Slave traders aren’t often called out by name, and therefore are subjected to little accountability. But Rothman shines a light on how these human traffickers were responsible for crimes against humanity, the sale of over half a million enslaved people among them.”—Fortune

"Amazing, disturbing…a stunning, unsettling account of a guilt shared more widely and more enthusiastically than many Americans like to think.”—Christian Science Monitor

“Harrowing… Rothman’s searing reportage makes it glaringly clear just how pervasive and profound the legacy of slavery has been and is to the American way of life.”—Seattle Times

“In popular culture, we’ve cast slave traders at social pariahs but Joshua Rothman’s book refutes that whitewashed narrative. In many ways, slave traders were celebrated businessmen and he traces the stories of three of the biggest slave traders to show how much the economies of the South and the North relied on America’s original sin.”—Reckon

“An argument that is sure to push the literature on the slave trade in new directions… an incisive analysis that should be essential reading.”—Journal of Southern History

"Rothman employs his wide breadth of knowledge about the era to vividly depict the human and economic impacts of the domestic slave trade as it burgeoned in the early 19th century...An excellent work of vast research that hauntingly delineates the ‘intimate daily savageries of the slave trade.'"—Kirkus

"Through meticulous archival research, Rothman debunks the myth that slave traders were social outcasts and tracks how their brazen advertisements and abusive treatment of captive men, women, and children were used by abolitionists to stoke public outrage. This trenchant study deserves a wide and impassioned readership.”—Publisher's Weekly

"Wide ranging and meticulously documented...A must read account that sheds light on the interdependence of slavery and capitalism in the United States."—Library Journal

"Antebellum America was simultaneously a robust marketplace of strivers and a landscape of horror for the millions who were enslaved. In this groundbreaking work, Joshua Rothman reveals the intimate connection between the two. His study of the under-examined slave trade shows how it was integral to the rise of interstate commerce, the flow of credit, and the establishment of new transportation routes. He also underscores its systematic cruelty, in which men gloried in rape and casually sold children from parents yet stood as respected members of the community. The Ledger and the Chain is detailed, incisive, and devastating."—T. J. Stiles, Pulitzer Prize–winning author of The First Tycoon and Custer's Trials

“The story of the international slave trade is well known to many. Much less known are the workings of the domestic slave trade in the United States that sent tens of thousands of enslaved African Americans from the Upper South to the cotton and sugar fields in the Deep South. With exhaustive research and piercing insight, Joshua Rothman’s The Ledger and the Chain brings that history alive through the stories of three men who sat at the nexus between Southern cotton producers and Northern financial institutions. As the tragic legacies of these men are still with us, this book should be read by all who are interested in our current racial predicament.”—Annette Gordon-Reed, coauthor of Most Blessed of the Patriarchs

“We are sometimes told that the quintessential American story is the tale of the small business that makes it big. If that’s the case, there’s no more American story than The Ledger and the Chain, Joshua Rothman’s brilliant new history of the slave-trading entrepreneurs Isaac Franklin, John Armfield, and Rice Ballard.”—Edward E. Baptist, author of The Half Has Never Been Told

“Joshua Rothman carefully and empirically builds from a forensic accounting of the lives and practices of those Frederick Douglass termed the ‘man-drovers’ and others called the ‘soul drivers’ to a social autopsy of the whole of American slavery in the nineteenth century. Essential.”—Walter Johnson, author of The Broken Heart of America