Levi's Stadium Unsafe in Any Seat: Would You TRUST Your SAFETY at This Venue? (Hardcover) 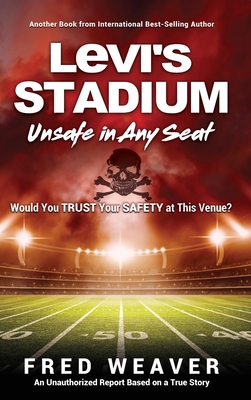 Levi's Stadium Unsafe in Any Seat: Would You TRUST Your SAFETY at This Venue? (Hardcover)

On November 1, 2018 at Levi's Stadium in Santa Clara, California, the San Francisco 49ers hosted the Oakland Raiders on a nationally televised Thursday Night Football game with additional Security including over 400 Law Enforcement Officers. But not one of those 'Sworn to Protect and Serve' was even aware of a brutal beating incident until a single visiting Oakland Raider's fan put himself in harm's way to contain, restrain and bring the assailant to arrest and custody.
This 'Good Samaritan' contacted the Santa Clara Police, Levi's Stadium Management and even talked with the NFL before all parties 'went dark' because of who the 'Good Samaritan' was.
In this explosive book, as an attorney for this case, In Pro Per, Fred Weaver details the chaos and lack of security at Levi's Stadium, leading to recent 'near fatal' attacks, and personal injury lawsuits. Weaver also exposes Santa Clara Police Department 'corruption', City of Santa Clara 'dirty laundry' and the City of Santa Clara Council Members' 'toxic' relationship with the San Francisco 49ers entities, making Levi's Stadium the Most Dangerous Public Venue in North America.
And the NFL tries to avoid any discussion of the quietly escalating issue of fan violence at your team's stadium as well...
This piece of legal work by Fred Weaver is destined to be studied for decades to come. A must-read for anyone caring about their safety at any type of national and international stadium sporting event or music concert and anyone interested in justice. An absolutely required reading for anyone pursing law or criminal justice as a life passion.