All About Vincent: The Life of a Lovelorn RPG Player (Who Knows Magic Tricks) (Hardcover) 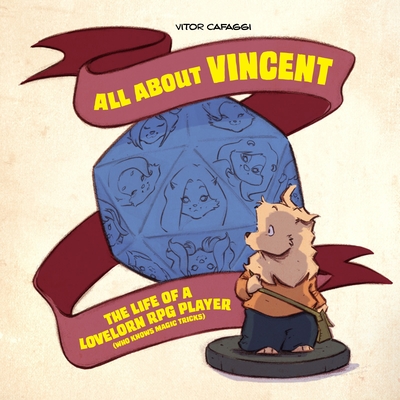 All About Vincent: The Life of a Lovelorn RPG Player (Who Knows Magic Tricks) (Hardcover)

Vincent the dog enjoys the simple things in his young life-empanadas with various fillings, performing magic tricks, comicbooks, playing with his little sister, and all-day Saturday RPG sessions with his best friends. He does not enjoy, however, being single (or physical activity). After seeing a girl (he mistakenly thinks ) smile at him on the bus, his life changes forever. Take a ride on the roller coaster of love with Vincent as he falls in and out of relationships, braves college, and learns the secret to his own happiness. International cartooning sensation Vitor Cafaggi’s complete serialized tale of love, loss, and game nights is collected here with a section of never before seen art and anecdotes to make you fall in love with Vincent all over again.
Vitor Cafaggi is a professor of visual narrative, script and character development in Minas Gerais, Brazil. His debut to the world of comics was with the webcomic Puny Parker, which narrated the childhood of his favorite hero, Spider-Man. He gained notoriety in his country with the graphic novels inspired by Brazilian super-property Turma da Mônica (Monica and Friends) and the comic strip Valente (Vincent) published by the Brazilian newspaper O Globo. Vitor has won the HQ Mix trophy multiple times for his excellence in comic art.