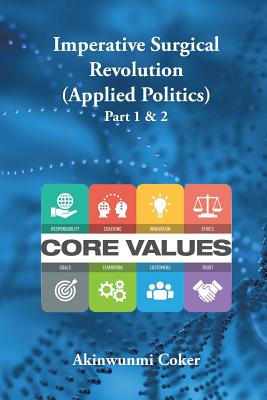 By Akinwunmi Coker
$14.35
Email or call for price

The book is about politics and the best way to improve and reform the statuesque. It is an academic and scholarly oriented book devised to emphasize on the need to reform and examine the Governments of the developing world, the various Institutions globally, departments, foreign policies, defense policies viz a viz the need to engage the youths meaningfully, putting into consideration the astronomical increase in world population. It is about how to properly equip Political Science and Public Administration graduates to be able to act like surgeons to Institutions and be able to revolutionize and proffer solutions to political issues and problems. It emphasize on meticulous research globally on best practices and proposes revolutionize reform to improve on old methodology. The discourse includes the imperatives of planning, strategizing and re strategizing to achieve success, advancement, modernization and victory in all ramifications. It is more of the practical aspect of politics, professionalism, code of conduct and necessary ethics for the experts and practitioners to be able to improve on the way Countries and the world are being managed.

Mr Akinwunmi Coker was born on the 16th February, 1958 to the family of Mr and Mrs Adeneye Olufemi Coker in Ebute Metta. Mr Akiwunmi Coker attended Ijero Baptist Primary School, Apapa Road, Ebute Metta from 1963- 1970. He proceeded to Abeokuta Grammar School, Igbein and Idiaba in 1971- 1972 and later joined Methodist Boys High School Adult Education from 1973-1976. Mr Akinwunmi Coker secured employment with the Nigerian Railway Corporation in 1977 and rose to the post of Assistant Executive Officer. In 1982, He took a three year study leave after securing admission with Panjab University, Chandigarh in India. He graduated in 1985 with BA {HONS} Second class Division in Public Administration. Mr Coker returned to Nigeria in 1985 for his National Youth Service. He was posted to Kano State and did his primary assignment at Federal Government College, Kano as Advance level teacher in charge of Government and General Studies. After the NYSC in 1986, he returned to Nigeria Railway Corporation as an Executive Officer and also secure part time teaching job with the Lagos State Continuing Education Center, ST Judes, Ebute Metta, Lagos from 1986 to 1988. In 1988, Mr Akinwunmi Coker secured an Admission for his Masters Degree in at North London University where he studied Business Management. In 2009 Mr Akinwunmi Coker secured another admission for Masters Degree in International Politics at Greenwich University London, He obtained his Masters Degree in 2010. Since 2010, Mr Akinwunmi Coker had been a Researcher, Educationist and Proprietor of Crystal Novel School; a private school in Lagos. Mr Akinwunmi Coker is a freelance writer and freelance editor. He has also written three other manuscripts aside from Imperative Surgical Revolution (Part 1&2) Genres I Write In: Politics and Social Sciences Professional Education: PANJAB UNIVERSITY, CHANDIGAH, INDIA, NORTH LONDON UNIVERSITY &UNIVERSITY OF GREENWICH, UK Memberships: ALUMNI OF MY UNIVERSITIES Certifications / Awards: BA (HONS) IN PUBLIC ADMINISTRATION AND MASTERS IN INTERNATIONAL POLITICS Areas of Expertise: PUBLIC ADMINISTRATION, APPLIED POLITICS AND INTERNATIONAL POLITICS