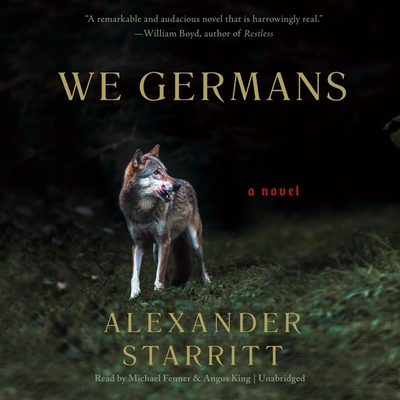 By Alexander Starritt, Michael Fenner (Read by), Angus King (Read by)
$35.00
Email or call for price

Written in the form of a letter from a German World War II veteran to his grandson, We Germans tells the gripping story of one man's quest for goodness and humanity in his desperate escape from the Eastern Front.

In the throes of the Second World War, young Meissner, a college student with dreams of becoming a scientist, is drafted into the German army and sent to the Eastern Front to fight the Russians. In retreat from the Red Army, harried and pursued through the Soviet countryside, Meissner's regiment and the other scattered German legions continue to collapse in the face of a Russian onslaught hell-bent on revenge in its race to Berlin. Fifty years later, now an old man reckoning with his past, Meissner pens a letter to his grandson explaining his actions, his guilt as a Nazi participator, and the difficulty of life after war.At once a thrilling story of adventure and a questing rumination on the moral ambiguity of war, We Germans offers a new point of entry to examine one of the greatest evils ever to face humanity. In his years fighting the Russians and attempting afterward to survive the Gulag, Meissner recounts a life lived in perseverance and atonement. Wracked with guilt and shame--both for himself and for Germany--the grandfather explains his dark rationale, exults in the courage of others, and blurs the boundaries of right and wrong.The drama at the heart of We Germans complicates our most steadfast beliefs and seeks to account for the complicity and rationalization of an entire country in the perpetration of heinous acts. In this breathless and page-turning story, Alexander Starritt also presents us with a deft exploration of the moral contradictions inherent in saving one's own life at the cost of the lives of others, and questions whether we can ever truly atone.